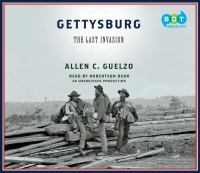 From the acclaimed Civil War historian, and coinciding with 150th anniversary of the legendary battle: a brilliant new history and the most intimate and richly readable account we have had, that draws the reader into the muck and grime of Gettysburg alongside the ordinary soldier, and depicts, as never before, the combination of personalities and circumstances that produced one of the great battles of all time.

Guelzo (Civil War era studies, Gettysburg Coll.; Abraham Lincoln as a Man of Ideas) here undertakes a magisterial study of the greatest battle of that war. In coverage ranging from descriptions of intimate details of the lives of soldiers and local townsfolk to a sweeping overview of the politics, personalities, and strategies of the Civil War, Guelzo immerses the listener in the world of 1863 America generally and the landscape of Gettysburg in particular. The coverage of the battle itself, the heart of the book, is vivid and riveting. Sadly, the audiobook lacks maps, and listeners unfamiliar with the geography of Gettysburg may sometimes have trouble following all of the action. The narrator, Robertson Dean, does justice to the drama and pathos of the book. VERDICT Highly recommended, especially for Civil War history buffs. ["A triumph of source use and presentation, engaging for the general reader but rigorous enough for the scholar. Highly recommended," read the starred review of the Knopf hc, LJ 5/15/13.—Ed.]—Forrest Link, Coll. of New Jersey Lib., Ewing [Page 49]. (c) Copyright 2013. Library Journals LLC, a wholly owned subsidiary of Media Source, Inc. No redistribution permitted.

Recounts the Battle of Gettysburg from the perspectives of ordinary soldiers to offer insight into nineteenth-century military practices, the pivotal influence of politics on the battle's course, and the unique characters of artillery units.

From the acclaimed Civil War historian, a brilliant new history—the most intimate and richly readable account we have had—of the climactic three-day battle of Gettysburg (July 1–3, 1863), which draws the reader into the heat, smoke, and grime of Gettysburg alongside the ordinary soldier, and depicts the combination of personalities and circumstances that produced the greatest battle of the Civil War, and one of the greatest in human history. Of the half-dozen full-length histories of the battle of Gettysburg written over the last century, none dives down so closely to the experience of the individual soldier, or looks so closely at the sway of politics over military decisions, or places the battle so firmly in the context of nineteenth-century military practice. Allen C. Guelzo shows us the face, the sights, and the sounds of nineteenth-century combat: the lay of the land, the fences and the stone walls, the gunpowder clouds that hampered movement and vision; the armies that caroused, foraged, kidnapped, sang, and were so filthy they could be smelled before they could be seen; the head-swimming difficulties of marshaling massive numbers of poorly trained soldiers, plus thousands of animals and wagons, with no better means of communication than those of Caesar and Alexander.What emerges is an untold story, from the trapped and terrified civilians in Gettysburg’s cellars to the insolent attitude of artillerymen, from the taste of gunpowder cartridges torn with the teeth to the sounds of marching columns, their tin cups clanking like an anvil chorus. Guelzo depicts the battle with unprecedented clarity, evoking a world where disoriented soldiers and officers wheel nearly blindly through woods and fields toward their clash, even as poetry and hymns spring to their minds with ease in the midst of carnage. Rebel soldiers look to march on Philadelphia and even New York, while the Union struggles to repel what will be the final invasion of the North. One hundred and fifty years later, the cornerstone battle of the Civil War comes vividly to life as a national epic, inspiring both horror and admiration.