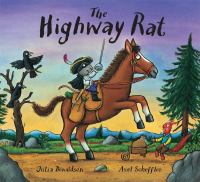 The Highway Rat A tale of stolen snacks

A very bad rat rides his horse along the highway stealing travelers' food, from a rabbit's clover to a spider's flies, until clever Duck introduces him to her "sister."

Inspired by Alfred Noyes' The Highwayman, the dashing but dastardly Highway Rat (sporting a hat and cape that would befit Zorro) travels the roads on his steady stead, plundering anyone and anything that he happens upon. The bounty is pretty paltry—clover from a rabbit, nuts from a squirrel, a leaf from some ants—but that doesn't deter him. He even steals flies from a spider and his own horse's hay. But then a duck tricks him into entering a cave. After he becomes lost, emerges from the other side horseless and hungry, gives up his life of crime, and lands a job in a cake shop—where he can finally indulge in all the treats he only hoped for as a Highway Rat. The wide-eyed, brightly colored cartoon illustrations depict a masked rat that looks more goofy than menacing. With rhyming text that uses the refrain of I am the Rat of the Highway, this is a rascally natural for group read-alouds. Copyright 2012 Booklist Reviews.

The team behind The Gruffalo and other titles returns with a tale of a rodent highwayman whose "manners were rough and rude," stealing food from those he meets on the road. Things look dark for this animal kingdom until a clever duck—who is also an impressive equestrienne—uses the Highway Rat's gluttony against him. Scheffler's drawings always offer plenty of pleasures: his bold ink lines and glowing colors give these pages a comic intensity, and his characters' round, bright eyes exude a geeky earnestness. But this story feels like a missed opportunity. The Highway Rat always demands sweets and junk food from his hardworking, peasant-class victims ("Give me your pastries and puddings!/ Give me your chocolate and cake!"), only to receive the rather bland stuff that makes up their subsistence diets (clover from a rabbit, leaves from the ants, flies from a spider). Rather than make comedic hay of this incongruity, Donaldson and Scheffler seem chiefly interested in portraying the ho-hum selfishness of their protagonist and meting out a humdrum punishment: "And they say he still works in the cake shop,/ sweeping the cake shop floor." Ages 4–8. (Apr.) [Page ]. Copyright 2012 PWxyz LLC

PreS-Gr 2—Inspired by Alfred Noyes's "The Highwayman," Donaldson tells the tale of a swashbuckling rat with mask and cape who stops hapless travelers and takes their food at sword point. While he prefers chocolates, puddings, and cakes, he steals clover from a rabbit, nuts from a squirrel, and even hay from his own horse. "The creatures who traveled the highway/grew thinner and thinner and thinner,/While the Highway Rat grew horribly fat/from eating up everyone's dinner." A brave duck in a red kerchief lures the thief to a distant cave, supposedly full of biscuits and buns. While he follows the echoes of his own voice deeper and deeper into the dark, the duck jumps on Rat's horse and takes the stolen food back to her hungry friends. Eventually he emerges on the other side of the hill, becomes a reformed rodent, and finds work sweeping the floor at a cake shop. Scheffler's rich, dark palette creates a brooding atmosphere just right for the Highway Rat's dastardly deeds, and his cartoon-style characters are a wonderful tongue-in-cheek contrast. Humorous details abound, including Gruffalo cookies in the cake shop from this British duo's The Gruffalo (Puffin, 2006). This well-paced, rollicking tale is a guaranteed storytime treat.—Mary Jean Smith, formerly at Southside Elementary School, Lebanon, TN [Page 134]. (c) Copyright 2013. Library Journals LLC, a wholly owned subsidiary of Media Source, Inc. No redistribution permitted.

A very bad rat rides his horse along the highway stealing travelers' food, from a rabbit's clover to a spider's flies, until clever Duck introduces him to her "sister."

The creators of the best-selling The Gruffalo present the story of nefarious Highway Rat, a wicked but loveable villain who turns a town upside down by stealing clover from a rabbit, nuts from a squirrel and hay from his own horse before getting his just desserts.

From the bestselling creators of The Gruffalo, Julia Donaldson and Axel SchefflerQuick! Hide all your goodies! The Highway Rat's coming, and he's going to steal your snacks...He takes clover from a rabbit, nuts from a squirrel -- he even steals his own horse's hay! Can no one stop him?The creators of Stick Man and A Gold Star for Zog stand and deliver this fabulous new story of a wickedly loveable villain who gets his just deserts.