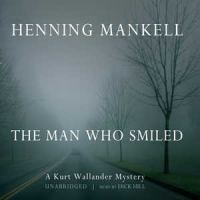 The man who smiled [a Kurt Wallander mystery]

A disillusioned Inspector Kurt Wallander is thrown back into the fray when he becomes both hunter and hunted. Crestfallen, dejected, and spiraling into an alcohol-fuelled depression after killing a man in the line of duty, Inspector Wallander has made up his mind to quit the police force for good. When an old acquaintance, a solicitor, seeks Wallander's help and later turns up dead, Wallander realizes that he was wrong not to listen.