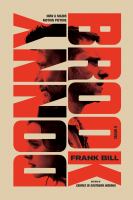 In the first novel from the author of the short-story collection Crimes in Southern Indiana (2011), characters fight, fornicate, tweak, drink, fight, betray, rob, kill, and fight en route to an annual bare-knuckle brawling tournament in, yes, southern Indiana, where they hope variously to deal meth, take revenge, and win the top prize of $100,000. Crimes had power but lacked finesse; Donnybrook has even more power and even less finesse. The prose is studiously untutored, rife with sentence fragments, unorthodox word use, and overheated metaphors that don't always scan. (Simple restraint would be welcome: must a character raise "his hairy appendages"? Can't he just raise his arms?) Even readers who adapt to the voice may be turned off by the uniformly deformed characters: with so many ugly people doing so many ugly things, it's just hard to care what happens to them. And if Bill has empathy for his own creations, he hides it awfully well. Readers who like hard-edged stories of down-and-outers would be better served by Willy Vlautin or Daniel Woodrell. Copyright 2012 Booklist Reviews.

Practitioner of a genre sometimes dubbed "rural noir," Bill sets his first novel (which follows his debut story collection, Crimes in Southern Indiana) in the backwaters of southeastern Kentucky and centers it on an ex-marine known as Jarhead. Desperate to feed his family, Jarhead robs a liquor store to pay the entry fee for the Donnybrook, a notorious bare-knuckles tournament in southern Indiana, where he hopes to win the competition's substantial purse. Set against his story is that of Chainsaw Angus, a retired bare-knuckles fighter, and Angus's sister, Liz, who have taken to cooking meth. After Liz and her opportunistic boyfriend, Ned, shoot Angus to steal a batch of meth, he too, makes his way to the Donnybrook, seeking revenge. The road behind is littered with bodies as the fighters brawl their way to Indiana, where Jarhead and Ned square off in the Donnybrook's horrific finale. VERDICT A violently brutal tale of survival by strength and instinct, this punch in the gut of a novel isn't for the faint of heart. [See Prepub Alert, 9/27/12.]—Lawrence Rungren, Merrimack Valley Lib. Consortium, Andover, MA [Page 72]. (c) Copyright 2013. Library Journals LLC, a wholly owned subsidiary of Media Source, Inc. No redistribution permitted.

Bill's debut novel (after his short story collection Crimes in Southern Indiana) trails another ruck of miscreants as they cook, shoot, snort, screw, punch, and head-butt their way across the Ohio River to backwoods gangster Bellmount McGill's annual donnybrook, a three-day, bare-knuckle free-for-all. Wanting the big-money pot to make a new life for his kids and their Oxy-addicted mother, tavern brawler Jarhead Earl robs a local gun shop for the ,000 entry fee. Double-crossing tweaker Ned Newton steals his stake from crank cooker Chainsaw Angus. Ned and the dealer's hateful sister, Liz, haul Angus's product to the ‘brook, which promises to make them a mint. Left for dead, Angus tears a trail of mayhem in their pursuit, trying to shake Fu Xi, a debt-collecting torture artist, and Ross Whalen, a vengeful deputy sheriff with secrets more vile than the acid burns and chainsaw accidents that flare up along the way. Waiting for them all is Purcell, a prophet of the johnboat who foresees calamity, strives for good, and whose appearance in Jarhead's life suggests a possible sequel. Fun and fast but with a prose so pulpy it sometimes turns to mush, this book lands its best punches below the belt. Agent: Stacia Decker, Donald Maass Literary Agency. (Mar.) [Page ]. Copyright 2012 PWxyz LLC

A three-day boxing tournament in southern Indiana sees twenty fighters--including Jarhead, a desperate man who wants to feed his children, and the undefeated Chainsaw Agnus, a meth cook--battle each other until only one is left.

A three-day bare-fisted fighting tournament in rural Indiana pits a desperate man trying to feed his children with a ruthless and undefeated master fighter turned meth-cooker in this new novel from the author of Crimes in Southern Indiana. Original. 30,000 first printing.

Now A Major Motion PictureThe raw and as-insane-as-anticipated first novel from Frank Bill, author of Crimes in Southern IndianaThe Donnybrook is a three-day bare-knuckle tournament held on a thousand-acre plot out in the sticks of southern Indiana. Twenty fighters. One wire-fence ring. Fight until only one man is left standing while a rowdy festival of onlookers—drunk and high on whatever's on offer—bet on the fighters. Jarhead is a desperate man who'd do just about anything to feed his children. He's also the toughest fighter in southeastern Kentucky, and he's convinced that his ticket to a better life is one last fight with a cash prize so big it'll solve all his problems. Meanwhile, there's Chainsaw Angus—an undefeated master fighter who isn't too keen on getting his face punched anymore, so he and his sister, Liz, have started cooking meth. And they get in deep. So deep that Liz wants it all for herself, and she might just be ready to kill her brother for it. One more showdown to take place at the Donnybrook. As we travel through the backwoods to get to the Donnybrook, we meet a cast of nasty, ruined characters driven to all sorts of evil, all in the name of getting their fix—drugs, violence, sex, money, honor. Donnybrook is exactly the fearless, explosive, amphetamine-fueled journey you'd expect from Frank Bill's first novel . . . and then some.