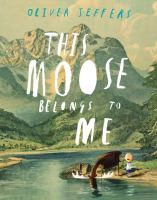 This moose belongs to me

A young boy learns that moose do not always follow the rules of proper pet behavior.

*Starred Review* Wilfred is a young man with seriousness of purpose (and a bow tie and suspenders), and he owns a moose. Finders keepers, after all. Wilfred explains to his moose, Marcel, all of the rules for being a good pet, but Marcel is impervious to such instructions. Indeed, the pair happens upon a little old lady only to discover that Marcel is actually Rodrigo, and not Willard's moose at all. Willard departs, despondent, and gets himself into some trouble, involving a tangle of powder-blue string and the advent of monsters. But the moose shows up to save him, and the two arrive at a new arrangement. Or so it seems . . . Jeffers composes his trademark painterly cartoon figures atop a variety of backgrounds, including Victorian linotypes and some Serbian landscape paintings (scrupulously sourced). He mashes them together with a bit of intentional pixilation and lots of good cheer, and infuses the mix with remarkable drama, conveying a bevy of emotions with simple gestures and an astute sense of color. The result is a spirited, appealing romp that hums with motley vitality and good-natured humor, certain to induce cheers and groans and chuckles galore. Copyright 2012 Booklist Reviews.

It won't take readers long to see that Wilfred has moose problems. He tries hard to make Marcel the moose obey his many rules ("Rule 7 : Maintaining a certain proximity to home"), but Marcel is only vaguely interested in Wilfred. What he really likes are apples. Wilfred's role as moose owner is further cast into doubt when a random old lady greets Marcel as Rodrigo. "You're back!" she cries. (Marcel reacts warmly, but only because she has an apple.) Eventually, Wilfred is able to recognize Marcel's independence; it's a useful and unexpectedly heartwarming lesson in lowered expectations. Nervous Wilfred is dressed in a geeky bowtie and suspenders, while Marcel is the size of a garden shed, with antlers like towel racks. What really ups the ante are Jeffers's (Stuck) incongruously grandiose backdrops. Wilfred's struggle plays out against dawn-kissed mountain ranges, brooding spruces, and sweeping American plains, giving the proceedings an air of faux-solemn dignity that's hilariously at odds with Wilfred's dorky personality. The moose may not belong to Wilfred, but the laughs certainly belong to Jeffers. Ages 3–7. (Nov.) [Page ]. Copyright 2012 PWxyz LLC

K-Gr 2—Wilfred wants a pet, so when a moose just happens to wander by, the boy claims him as his own and dedicates a lot of time to teaching Marcel the rules of being a good one. They fill their days exploring the countryside and taking long walks. One day, however, Wilfred discovers that his moose might have a whole other life that he knows nothing about. He must figure out how to process this shocking discovery and decide if he can accept the fact that he must alter the boundaries of their friendship. With its classic story of friendship and witty text, this beautiful picture book will appeal to children. The fonts are mixed between standard type and words that appear to be handwritten. Speech bubbles appear on some pages as well, to give voice to Wilfred and several other characters. The illustrations are a combination of oil paint onto old linotype, painted landscapes, and technical enhancements. The characters are whimsical and bright, and the appealing landscapes carry readers along on this journey of two unlikely friends. This Moose Belongs to Me will be adored by younger elementary students, particularly those who have longed to keep a wild animal as a pet.—Amy Shepherd, St. Anne's Episcopal School, Middleton, DE [Page 80]. (c) Copyright 2012. Library Journals LLC, a wholly owned subsidiary of Media Source, Inc. No redistribution permitted.

A young boy learns that moose do not always follow the rules of proper pet behavior.

Enjoying his relationship with a pet moose who generally follows all the rules of his orderly life, young Wilfred resorts to using apples to bribe the moose when he will not go whichever way Wilfred wants him to go, but perhaps this is because Wilfred's pet doesn't quite realize that he belongs to anyone? 25,000 first printing.

From the illustrator of the #1 smash hit The Day the Crayons Quit comes the age-old tale of a boy and his moose . . .Wilfred is a boy with rules. He lives a very orderly life. It's fortunate, then, that he has a pet who abides by rules, such as not making noise while Wilfred educates him on his record collection. There is, however, one rule that Wilfred's pet has difficulty following: Going whichever way Wilfred wants to go. Perhaps this is because Wilfred's pet doesn't quite realize that he belongs to anyone.A moose can be obstinate in such ways.Fortunately, the two manage to work out a compromise. Let's just say it involves apples.Oliver Jeffers, the bestselling creator of Stuck and The Incredible Book Eating Boy, delivers another deceptively simple book sure to make kids giggle.