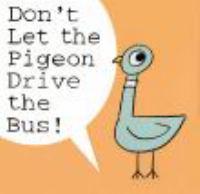 "When a bus driver takes a break from his route, a very unlikely volunteer springs up to take his place-- a pigeon. But you never met one like this before. Container.

*Starred Review* Thanks to clever animation and valuable extras, this first-rate adaptation of Mo Willems' hilarious, beloved picture book (2003) delights on every level. In a chaotic prologue fueled by a burst of Dixieland jazz, the manic titular hero (expertly voiced by Willems) fantasizes about driving a bus. Goofy sound effects flavor images of the vehicle nearly spinning out of control, much to the bird's delight. Then the bus driver (narrated by Jon Scieszka in a fun bit of vocal casting) says he has to leave and instructs, "Don't let the pigeon drive the bus." As the pigeon begs, pleads, and bargains ("I'll give you five dollars; it's only a bus"), animation becomes more jittery, wildly conveying his increasing agitation. The program deftly employs an amusing split-screen technique so that as the pigeon's requests accumulate, an explosive temper tantrum suddenly fills the frame. In a wonderful touch, children's voices yell "No!" to every request. A special "Karaoke" option, devoid of the nay-saying chorus, invites viewers to supply their own responses. In delightful closing credits, the bus driver and pigeon engage in one last discussion. The DVD includes an enlightening interview with Willems, who discusses development of the pigeon character and the book. Especially priceless is footage of a school visit in which Willems reads the story to an enthusiastic audience (adorned with pigeon hats) and demonstrates how to draw the pigeon. This enjoyable program invites repeat viewings. Also available as a book and CD package ($29.95) and CD ($12.95). Preschool-Grade 1. Copyright 2019 Booklist Reviews.

PreS-Gr 2—Take a multiple award-winning book (Hyperion, 2003) written and illustrated by Mo Willems, add the author's and Jon Scieszka's voices, Peter List's animation, and Scotty Huff's lively jazz music, and the result is a tremendously captivating film. The well-loved tale of a pigeon who dreams of driving a bus, and who pleads and cajoles for the opportunity, is brought to life. The DVD opens with a choice of a Karaoke version, or one in which youngsters supply a resounding "NO!" in response to Pigeon's unrelenting bargaining to be allowed to drive the bus. Read-along subtitles, in which the words are highlighted as they are spoken, are optional. Each version opens with extra scenes of Pigeon driving a bus and delighting in the havoc he wreaks along the route. A jazzy beat sets the lively tempo of the scenes, and crazy cartoon sound effects add even more humor to Pigeon's crazy antics. The pages have been fully animated; Pigeon's expressions after each denial are priceless, and the framing of the simple bird on blank pastel pages makes his reactions even more effective. As credits roll, Pigeon and the driver discuss bus models and Pigeon's inability to actually drive. In the bonus interview, Willems offers background for the story and shows highlights of his visit with first-graders. He also teaches the children to draw Pigeon, since he thinks that books should be objects of play and doorways to creativity. Pigeon and Willems will enchant viewers.—MaryAnn Karre, Horace Mann Elementary School, Binghamton, NY [Page 57]. Copyright 2008 Reed Business Information.