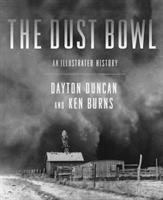 The Dust Bowl An illustrated history

Draws on reports, newspaper articles, and interviews to chronicle the American Dust Bowl, providing photographs to illustrate the catastrophe as well as offer a tribute to man's relationship to the land and his ability to persevere.

Given our current drought and economic woes, the powerhouse team of Duncan and Burns (The National Parks, 2009) chose a sharply relevant subject, the Dust Bowl, for their latest book and documentary. This riveting, illustrated volume of vivid written and oral history extends the scope of the film (premiering on PBS in mid-November) and clarifies our understanding of the "worst manmade ecological disaster in American history." The Great Plains, a land of little rain and perpetual wind redeemed by buffalo grass, experienced a rare wet spell in the 1920s, just as homesteaders were encouraged to farm, and technological advances made it possible to plow up millions of acres of sod, exposing the soil. When the rains stopped in the early 1930s, fierce winds generated massive, rampaging, otherworldly dust storms. From struggling with the invasive, smothering dust to the immense "folk migration" as families fled west to FDR's attempts to mitigate the disaster, Duncan and Burns chronicle every harrowing phase of this "decade of human pain and environmental degradation." The result is a resounding chronicle of why we must preserve Earth's life-sustaining ecosystems. Copyright 2012 Booklist Reviews.

Draws on reports, newspaper articles, and interviews to chronicle the American Dust Bowl, providing photographs to illustrate the catastrophe as well as offer a tribute to man's relationship to the land and his ability to persevere.

In this riveting chronicle, which accompanies a documentary to be broadcast on PBS in the fall, Dayton Duncan and Ken Burns capture the profound drama of the American Dust Bowl of the 1930s. Terrifying photographs of mile-high dust storms, along with firsthand accounts by more than two dozen eyewitnesses, bring to life this heart-wrenching catastrophe, when a combination of drought, wind, and poor farming practices turned millions of acres of the Great Plains into a wasteland, killing crops and livestock, threatening the lives of small children, burying homesteaders' hopes under huge dunes of dirt. Burns and Duncan collected more than 300 mesmerizing photographs, some never before published, scoured private letters, government reports, and newspaper articles, and conducted in-depth interviews to produce a document that may likely be the last recorded testimony of the generation who lived through this defining decade.