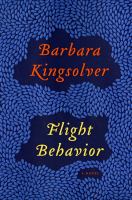 *Starred Review* Drawing on both her Appalachian roots and her background in biology, Kingsolver delivers a passionate novel on the effects of global warming. Dellarobia Turnbow got pregnant in high school; now, some 11 years into her unhappy marriage, she's ready for a big change, and she thinks she's found it with a randy young telephone lineman. But on her way to a rendezvous, she is waylaid by the sight of a forest ablaze with millions of butterflies. Their usual migratory route has been disrupted, and what looks to be a stunningly beautiful view is really an ominous sign, for the Appalachian winter could prove to be the demise of the species. The phenomenon draws the whole world to Dellarobia's doorstep—scientists, the media, hordes of tourists—and gives her new and galvanizing insight into her poverty-stricken life on the sheep farm of her disapproving in-laws. Kingsolver, as always a fluent and eloquent writer, skillfully sets the hook of her fascinating story before launching into activist mode with more than a few pointed speeches delivered by an eminent scientist (and Kingsolver stand-in). By that time, though, readers will be well and truly smitten with feisty, funny, red-haired Dellarobia and her determined quest to widen the confines of her world. HIGH-DEMAND BACKSTORY: On the heels of the beloved author's best-selling The Lacuna (2009), which won the Orange Prize, her latest novel will receive a 500,000-copy first printing and be supported by an eight-city author tour. Copyright 2012 Booklist Reviews.

Always beloved, Kingsolver shot into the heavens with her last novel, The Lacuna, a booming best seller that also won the Orange Prize. Said to be her most accessible (but when wasn't she ever thus?), her new work features Dellarobia Turnbow, who dreamed of something bigger than Feathertown, TN, but married young and is now stuck raising kids on a hardscrabble farm. On the way to a rendezvous—her first break with life as it is—Dellarobia comes upon a forested glen filled with silent red fire. Fundamentalists, climate scientists, politicians, and the media mob all come to weigh in fervently on the cause and meaning of this phenomenon, as Dellarobia and her neighbors fend off the invasion. With a 500,000-copy first printing. [Page 76]. (c) Copyright 2012. Library Journals LLC, a wholly owned subsidiary of Media Source, Inc. No redistribution permitted.

Dellarobia Turnbow is in a perpetual state of fight or flight. Married at 17 to kind, dull Cub, she finds even the satisfaction of motherhood small consolation for the stultifying existence on her in-laws' struggling Tennessee sheep farm. When a fluke of nature upends the monotony of her life, Dellarobia morphs into the church's poster child for a miracle, an Internet phenomenon, and a woman on the verge of unexpected opportunity as scientists, reporters, and ecotourists converge on the Turnbow property. Orange Prize winner Kingsolver (The Lacuna) performs literary magic, generously illuminating both sides of the culture wars, from the global-warming debate to public eduction in America. It's a joy to watch Dellarobia and her precocious son, Preston, blossom under the tutelage of entomologist Ovid Byron. VERDICT Like E.O. Wilson in his novel Anthill, Kingsolver draws upon her prodigious knowledge of the natural world to enlighten readers about the intricacies of the migration patterns of monarch butterflies while linking their behavior to the even more fascinating conduct of the human species. Highly recommended. [See Prepub Alert, 5/4/12.]—Sally Bissell, Lee Cty. Lib. Syst., Ft. Myers, FL [Page 85]. (c) Copyright 2012. Library Journals LLC, a wholly owned subsidiary of Media Source, Inc. No redistribution permitted.

With her powerful new novel, Kingsolver (The Lacuna) delivers literary fiction that conveys an urgent social message. Set in a rural Tennessee that has endured unseasonal rain, the plot explores the effects of a bizarre biological event on a Bible Belt community. The sight that young wife and mother Dellarobia Turnbow comes upon—millions of monarch butterflies glowing like a "lake of fire" in a sheep pasture owned by her in-laws—is immediately branded a miracle, and promises a lucrative tourist season for the financially beleaguered Turnbows. But the arrival of a research team led by sexy scientist Ovid Byron reveals the troubling truth behind the butterflies' presence: they've been driven by pollution from their usual Mexican winter grounds and now face extinction due to northern hemisphere temperatures. Equally threatening is the fact that her father-in-law, Bear, has sold the land to loggers. Already restless in her marriage to the passive Cub, for whom she gave up college when she became pregnant at 17, unsophisticated, cigarette-addicted Dellarobia takes a mammoth leap when she starts working with the research team. As her horizons expand, she faces a choice between the status quo and, perhaps, personal fulfillment. Spunky Dellarobia is immensely appealing; the caustic view she holds of her husband, in-laws, and neighbors, the self-deprecating repartee she has with her best friend Dovey, and her views about the tedium of motherhood combined with a loving but clear-eyed appraisal of her own children invest the narrative with authenticity and sparkling humor. Kingsolver also animates and never judges the uneducated, superstitious, religiously devout residents of Feathertown. As Dellarobia flees into a belated coming-of-age, which becomes the ironic outcome of the Monarchs' flight path to possible catastrophe in the collapse of a continental ecosystem, the dramatic saga becomes a clarion call about climate change, too lucid and vivid for even skeptics to ignore. 8-city author tour. One-day laydown. (Nov. 5) [Page ]. Copyright 2012 PWxyz LLC

Tired of living on a failing farm and suffering oppressive poverty, bored housewife Dellarobia Turnbow, on the way to meet a potential lover, is detoured by a miraculous event on the Appalachian mountainside that ignites a media and religious firestorm that changes her life forever.

Tired of living on a failing farm and suffering oppressive poverty, bored housewife Dellarobia Turnbow, on the way to meet a potential lover, is detoured by a miraculous event on the Appalachian mountainside that ignites a media and religious firestorm that changes her life forever. 500,000 first printing.

Amazon Best Book of the Month

"Kingsolver is a gifted magician of words."
—Time

The extraordinary New York Times bestselling author of The Lacuna (winner of the Orange Prize), The Poisonwood Bible (nominated for the Pulitzer Prize), and Animal, Vegetable, Miracle, Barbara Kingsolver returns with a truly stunning and unforgettable work. Flight Behavior is a brilliant and suspenseful novel set in present day Appalachia; a breathtaking parable of catastrophe and denial that explores how the complexities we inevitably encounter in life lead us to believe in our particular chosen truths. Kingsolver's riveting story concerns a young wife and mother on a failing farm in rural Tennessee who experiences something she cannot explain, and how her discovery energizes various competing factions—religious leaders, climate scientists, environmentalists, politicians—trapping her in the center of the conflict and ultimately opening up her world. Flight Behavior is arguably Kingsolver's must thrilling and accessible novel to date, and like so many other of her acclaimed works, represents contemporary American fiction at its finest.