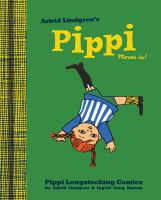 Lindgren's Pippi Longstocking books have been published in many languages since the 1940s and adapted into television and movies in Europe and the U.S. Yet the comic books, first published in 1957, have never been translated into English until now. In this volume, Pippi, the strongest little girl in the world, has moved into the Villa Villekulla in a small Scandinavian village, where she lives with a monkey, Mr. Nilsson, and her horse but no adults. Pippi makes friends with next-door neighbors Tommy and Annika, but she doesn't get along with most adults, especially any who behave unkindly toward children and animals. The comics reimagine Lindgren's famous novels with bright, colorful art by Vang Nyman. The episodic stories are told entirely in the word balloons. The minimal backgrounds and simple art make the story easy for younger readers to understand. This book will appeal to young Pippi Longstocking fans as well as adults who grew up reading her books. Copyright 2012 Booklist Reviews.

In 1957, Pippi Longstocking's creator teamed up with artist Vang Nyman to reimagine Pippi in comics form. Now the tales have been translated into English for the first time. When Pippi moves into Villa Villekulla, quiet and orderly Sweden will never be the same. Pippi has no respect for the adult world, and the children around her delight as she tramples on the rules and expectations meant to keep children in line. She is a kind of superhero, lifting strong men in the air and buying mountains of sweets and toys on a whim. When she is about to step off a cliff and her friend warns her she's going to fall. Pippi insists: "I'm not going to fall, I'm going to fly!" The stories in this first collection are sweet and strange, with Pippi fearlessly leading the way toward a world free of adult oppression, or at least one where it's okay to be a little weird. Vang Nyman's illustrations are sharp and clear, and Pippi's surreal actions are rendered all the more acceptable by the warm and bright colors. All ages. (Nov.) [Page ]. Copyright 2012 PWxyz LLC

Gr 1–3—Written and illustrated by the original series creators, these 1950s-era comics have been translated into English for the first time. Although they may be a tough sell to today's audiences, the collection will pair nicely with the novels and might serve to generate some interest in the character. Over the course of 12 short stories, readers get to know the quirky world of Pippi Longstocking. The opening selection tells the story of when Pippi; her horse; and monkey sidekick, Mr. Nillson, moved in next to everyday kids Tommy and Annika. Everything about Pippi is unusual, from her super strength to her curious lack of parents. The following comics explore different aspects of her personality, from defeating the strongest man in the world to getting shipwrecked on purpose. Pippi's dialogue is simple, brief, and full of quips. The basic humor and kids vs. adults situations have the potential to draw in readers. The artwork is bold, with heavy doses of primary colors. The layouts are easy to follow, with the exception of an oddly placed caption box here and there. It's great to see these comics available to American audiences. Wide appeal will be elusive, but fans of Pippi and classic comics will be pleased.—Travis Jonker, Wayland Union Schools, MI [Page 185]. (c) Copyright 2013. Library Journals LLC, a wholly owned subsidiary of Media Source, Inc. No redistribution permitted.

Follows the adventures of Pippi Longstocking as she plays tag with the police, goes to school, and introduces her neighbors to her monkey M. Nilsson.

THE LOST MASTERPIECE FROM ASTRID LINDGREN'S CHILDREN'S CLASSICPippi Moves In marks the first time that the legendary Pippi Longstocking comics by the famed children's author and creator Astrid Lindgren and Danish illustrator Ingrid Vang Nyman will be published outside of Scandinavia in thirty years, as well as their first ever publication in English. The outspoken strong-girl with the carrot-colored pigtails and the mismatched socks has enthralled generations of children the world over with her fabulous exploits at Villa Villekulla, where she lives with her horse and monkey. Countless translations of the chapter books are available in more than sixty languages. Pippi is Sweden's best-known children's export, making it all the more remarkable that D+Q has discovered what will be a three-volume series.The comics are re-imaginings of the classic chapter book stories and were originally published in the Swedish magazine Humpty Dumpty in 1957–1959, a decade after the original books. The comics spotlight both Lindgren's brilliant writing and Vang Nyman's bold bright colors that seem presciently and eerily modern. The original illustrator for the chapter books, Vang Nyman was an avant-garde champion of the importance of children's literature who insisted that art in children's books needed to meet the same esthetic standards as art in any other medium. Sadly Vang Nyman never achieved international success, and tragically committed suicide in 1959 due to mental health issues, while Lindgren went on to become one of the world's best-loved writers with more than 145 million books sold worldwide.Similar to D+Q's 2005 unearthing of the Tove Jansson's Moomin comic strip, which has more than 100,000 units in print, these mid-century classics are waiting to be discovered and enjoyed by the world's legions of Pippi fans, both young and old.