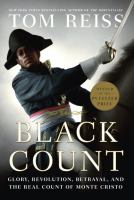 The Black Count Glory, revolution, betrayal, and the real Count of Monte Cristo

Explores the life and career of Thomas Alexandre Dumas, a man almost unknown today, but whose swashbuckling exploits appear in The three musketeers and whose trials and triumphs inspired The count of Monte Cristo.

The inspiration for some of the great adventure tales of Alexandre Dumas has long been a subject of curiosity and debate. According to Reiss, the inspiration for the great novel of intrigue, betrayal, and revenge, The Count of Monte Cristo, was Dumas' own father, General Alexandre Alex Dumas. In this often thrilling and often sad chronicle, Reiss makes clear that Alex lived a life as full of adventure, triumph, and tragic loss as any of his son's literary creations. He was born in Haiti, the child of an enslaved mother and an erratic French aristocrat who briefly sold his son into slavery. Despite the obvious and immense political and racial obstacles in his path, Alex found his way to Paris, became a skilled swordsman, and rose rapidly in the reorganized army of the French Republic, where he served admirably during Napoléon's invasions of Egypt. Unfortunately, like his literary counterpart, Edmond Dantès, Alex incurred the hostility of powerful people, leading to his fall from grace and eventual impoverishment. This is an absorbing biography that should redeem its subject from undeserved obscurity. Copyright 2012 Booklist Reviews.

Author of the best-selling The Orientalist, which unfolded the complicated life story of a Caucasus-born Jew who declared himself a Muslim prince, Reiss seems like the right guy to chronicle slave-turned-general Alexandre Dumas. He'd be unknown today had the son who shares his name not used his adventures as the basis for numerous enduring novels. [Page 62]. (c) Copyright 2012. Library Journals LLC, a wholly owned subsidiary of Media Source, Inc. No redistribution permitted.

Confronted with the surname Dumas, most readers are likely to think of Alexandre Dumas, author of such classics as The Count of Monte Cristo and The Three Musketeers. But in The Black Count, Reiss (The Orientalist) explores the life of the writer's father, a man of mixed racial and cultural heritage, born in Saint-Domingue to a slave mother (her last name was Dumas) and a French aristocrat. His father brought him to France, where, because of his tremendous courage and physical gifts, he rose through the ranks of the French military under Napoleon to become a general. He was taken prisoner of war when his ship returning to France from Cairo was captured near Sicily, and he died five years later, when his son was not yet four. Reiss seeks to demonstrate the great effect of the elder Dumas on his son's fiction, inspiring many of the characters and situations in those works. VERDICT While Reiss occasionally strays from the central narrative with an abundance of tangential detail regarding the French Revolution, this accessible read is recommended for fans of popular narrative nonfiction as well as for both casual and serious students of French history, and of the younger Dumas's work.—Ben Neal, Sullivan Cty. P.L., Bristol, TN. (c) Copyright 2012. Library Journals LLC, a wholly owned subsidiary of Media Source, Inc. No redistribution permitted.

Alex Dumas, an extraordinary man whose sensational life had been largely lost to history solely because of his race, takes the spotlight in this dynamic tale. Thanks to Reiss's excellent research, combined with the passionate memorial his son, Alexandre Dumas, consistently built in his own novels and memoir, Dumas's life has been brought back to light. Father to the well-known novelist and clear inspiration for The Count of Monte Cristo, as well as the adventurous spirit of The Three Musketeers and other stories, Dumas (1762–1806) rose through the ranks of the French army from a lowly private in the dragoons to become a respected general who marched into Egypt at Napoleon's side. (The rivalry and juxtaposition between these two leaders proves fascinating.) Born in what is now Haiti to a French nobleman father and a slave mother, the biracial Dumas chanced to come of age during the French Revolution, a brief period of equality in the French empire; he was thus granted numerous opportunities that the son of a slave 20 years before him (or even 20 years later) would not have enjoyed. Reiss capitalizes on his subject's charged personality as well as the revolutionary times in which he lived to create an exciting narrative. Agent: Tina Bennett, Janklow & Nesbit. (Sept.) [Page ]. Copyright 2012 PWxyz LLC

The author of the best-selling The Orientalist traces the story of the mixed-race swordsman and father of novelist Alexandre Dumas, discussing his rise to the French aristocracy, his military triumphs and the adventures that inspired such classics as The Three Musketeers and The Count of Monte Cristo.

Traces the story of the mixed-race swordsman and father of novelist Alexandre Dumas, discussing his rise to the French aristocracy, his military triumphs ,and the adventures that inspired such classics as "The Three Musketeers" and "The Count of Monte Cristo."

WINNER OF THE 2013 PULITZER PRIZE FOR BIOGRAPHYGeneral Alex Dumas is a man almost unknown today, yet his story is strikingly familiar—because his son, the novelist Alexandre Dumas, used his larger-than-life feats as inspiration for such classics as The Count of Monte Cristo and The Three Musketeers.But, hidden behind General Dumas's swashbuckling adventures was an even more incredible secret: he was the son of a black slave—who rose higher in the white world than any man of his race would before our own time. Born in Saint-Domingue (now Haiti), Alex Dumas made his way to Paris, where he rose to command armies at the height of the Revolution—until he met an implacable enemy he could not defeat.The Black Count is simultaneously a riveting adventure story, a lushly textured evocation of 18th-century France, and a window into the modern world’s first multi-racial society. TIME magazine called The Black Count "one of those quintessentially human stories of strength and courage that sheds light on the historical moment that made it possible." But it is also a heartbreaking story of the enduring bonds of love between a father and son.