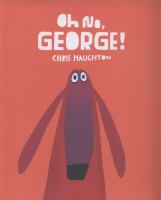 Harboring the best of intentions and trusted by his owner to be a well-behaved dog while alone during the day, George resists the temptation to chase cats and dig up flowers but finds his resolve wavering when he spies a mouthwatering cake on the table.

With his big, innocent eyes, floppy ears, and long snout, George is one adorable pooch. And he wants so badly to be good for his owner, Harry. But when Harry—a curious, green-skinned fellow—goes out, temptations abound. When George spots a cake in the kitchen, his resolve grows weak, and the spare text asks, "What will George do?" After a moment of contemplation, the answer is, yes, George will eat the cake! The same setup follows with a cat (he can't resist chasing it) and a flower bed (perfect for digging). By the time Harry gets home, there's one mighty mess. But with those sad eyes, who could be mad? Not Harry, who takes his friend to the park, where—"uh-oh"— George immediately spies a cake at a picnic. What will he do? Haughton's retro illustrations capture George's inner turmoil in both the position of his ears and the subtle shift of his eyeballs. Of course, there are no kids out there who struggle with resisting temptation, so this book won't resonate at all . . . right? Copyright 2012 Booklist Reviews.

George, the hero of this dog-behaving-badly story from Haughton (Little Owl Lost), hits the canine trifecta: oversize snout, floppy ears, and an anguished expression. His body is a polyhedron of warm red and fuchsia, and the house he shares with his troll-like owner, Harry, is similarly bathed in supersaturated hues. George vows to be good when Harry leaves, but he promptly encounters temptation ("It's cake! I said I'd be good, George thinks, but I love cake"). In a droll parody of an old-fashioned moral lesson, the narrator intones, "What will George do?" as George gazes out at readers with a familiar dog-in-headlights look. The suspense is broken when the page turns to a double spread of George chowing down, as the narrator cries, "Oh no, George!" The results of several errors of judgment greet Harry upon his return. A brief but impressive period of high-minded resolve during a walk is followed by the speedy return of the mush-willed George readers have already grown to love. Behind the dopey entertainment, though, there's a carefully disciplined visual and verbal economy—evidence of Haughton's substantial gifts. Ages 2–up. (Mar.) [Page ]. Copyright 2012 PWxyz LLC

PreS-Gr 2—George wants to be good-he really does-but some temptations are too hard to resist. The pup's first downfall is cake, then the cat, then dirt. Predictably, eating the cake, playing with the cat, and digging in the dirt don't impress Harry, his owner. George is contrite, and after Harry cleans up, they go out for a walk together, and he manages to pass up each of the previous temptations. In the end, though, readers are left to guess whether digging through an interesting-smelling garbage can will prove too big a temptation for the reformed canine. George's exploits are displayed on bright spreads while the repetitive text simply says, "Oh no, George!" leaving readers to infer from the picture what choice he made. Haughton's digitally rendered illustrations have a modern-retro feel, and creative kids will enjoy seeing that the conventional color rules are missing; George is a fuchsia, red, and mulberry delight, while Harry is olive-green with navy blue and aqua hair. Make room in your dog-themed storytimes for this crowd-pleaser.—Amy Commers, South St. Paul Public Library, MN [Page 126]. (c) Copyright 2012. Library Journals LLC, a wholly owned subsidiary of Media Source, Inc. No redistribution permitted.

George finds it hard to be a good dog when there are cats to chase, flowers to dig up, and a delicious cake sitting on the kitchen table.

Harboring the best of intentions and trusted by his owner to be a well-behaved dog while alone during the day, George resists the temptation to chase cats and dig up flowers but finds his resolve wavering when he spies a mouthwatering cake on the table.

Bold, hilarious artwork captures the innocent charm of affable George, a dog who is trying to be good ' with disastrous results.George is a dog with all the best intentions. And his owner, Harry, has all the best hopes that George will be a well-behaved dog when he leaves him alone for the day. But when George spies a delicious cake sitting on the kitchen table, his resolve starts to waver. You see, George loves cake. . . . Uh-oh. What to do now? It's so hard to be a good dog when there are cats to chase and flowers to dig up! What ever will Harry say when he gets back? Chris Haughton's fetchingly funny story and vibrant, retro illustrations are sure to lure dog lovers of all ages ' and anyone who has ever met a temptation too good to resist.