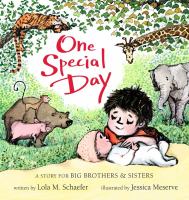 An energetic and imaginative boy becomes a big brother.

Spencer is a boy. Each of his boy-typical characteristics—strong, fast, tall, loud, wild, messy—are accompanied by a metaphor comparing him to an animal that is pictured but not stated: he's as strong as a bear slurping honey from a beehive; as fast as a horse galloping off the page; and as tall as a giraffe towering next to a tree. On one special day, though, Spencer is quiet and gentle as he becomes a big brother. As his father cradles the bundle of baby, Spencer sits in angelic repose ready to take on his new big-brother responsibility. The engaging visual cues of Meserve's vibrant and energetic artwork and the story's dynamic pacing turn what could have been just another new-sibling book into something much more. In an oh-so-subtle fashion, Schaefer challenges stereotypical gender roles in this insightful picture book. Copyright 2012 Booklist Reviews.

Out in his backyard, Spencer can be a lot of things: tall as a giraffe (with help from a ladder) or loud as an elephant (provided he has two metal trash cans to bang). Strong, fast, messy, wild—Spencer has those qualities and more within him. But the big question is, can Spencer be gentle when Mom and Dad bring home a new sibling? This is more of an extended rhetorical question than a story; it recognizes—celebrates, really—kids' more rambunctious, free-spirited tendencies, while demonstrating that those same attributes aren't mutually exclusive from tenderness, when it's called for. Schaefer (Just One Bite) wisely invites audience participation by never identifying the animals that complete Spencer's many similes, letting images of the creatures provide the answers, rebus-style. Meserve's (Can Anybody Hear Me?) bold digital drawings are a big plus: she gives Spencer an energetic, devil-may-care intensity that will feel instantly familiar to both kids and parents, and Spencer's expansive, slightly wild backyard, with its climbing trees, meadow, and mud hole, will be the envy of all ages. Ages 2–5. Agent: Rosemary Stimola, Stimola Literary Studio. (Mar.) [Page ]. Copyright 2011 PWxyz LLC

Pres-Gr 1—Young Spencer is strong as a bear, fast as a horse, tall as a giraffe, and loud as an elephant. But on one special day, he becomes something he has never been before: a brother. With a simple interactive text and thoroughly engaging illustrations, this book is a perfect blending of words and pictures. Beginning with an image of the child standing beside his grandmother as a car pulls away, digitally rendered oil pastels in bold spring colors depict a dark-haired tyke reminiscent of Maurice Sendak's Johnny. Spencer awaits his parents' return by happily running, jumping, and climbing a large apple tree in his grandmother's yard while large animals appear to define his talents. Short beginning sentences require a turn of the page and a fill-in-the-name-of-the-illustrated-animal for completion ("He was funny—funny as a [monkey]."). Large spreads have a sunny quality and are filled with creatures large and small. When his parents finally return, Spencer becomes "gentle," sitting with a pillow in his lap as his father hands him the baby. The final images of this loving family will melt readers' hearts. A special book for the special day.—Teri Markson, Los Angeles Public Library [Page 96]. (c) Copyright 2012. Library Journals LLC, a wholly owned subsidiary of Media Source, Inc. No redistribution permitted.

An energetic and imaginative boy becomes a big brother.

A new baby sibling helps young Spencer discover different aspects of his own character when changes in his world make him aware that he is not only strong, funny and brave but also loving and gentle. By the award-winning author of Frankie Stein. 15,000 first printing.

Does having a new brother or sister make you into MORE than you already are? Spencer is about to find out. He's as strong as a bear, as funny as a monkey, and as wild as a tiger. But on one special day, everything changes. Now Spencer is strong, funny, wild, brave, free . . . and gentle, too.

Does having a new brother or sister make you into MORE than you already are?Spencer is about to find out.He's as strong as a bear, as funny as a monkey, and as wild as a tiger. But on one special day, everything changes. Now Spencer is strong, funny, wild, brave, free... and gentle, too.