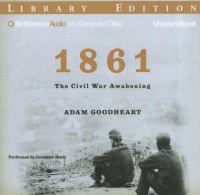 Goodheart provides a new interpretation of what spurred the American Civil War. Here, he describes how cultural differences played surprising roles in the move toward war.

Goodheart delves into the origins of the Civil War with a series of fascinating character studies and deep dives into the culture of the time. Ably narrated by Jonathan Davis. [Page 42]. (c) Copyright 2014. Library Journals LLC, a wholly owned subsidiary of Media Source, Inc. No redistribution permitted.

Chronicles the revolution of ideas that preceded--and led to--the start of the Civil War, looking at a diverse cast of characters and the actions of citizens throughout the country in their efforts to move beyond compromise and end slavery.

1861 is an epic of courage and heroism beyond the battlefields. Early in that fateful year, a second American revolution unfolded, inspiring a new generation to reject their parents&; faith in compromise and appeasement, to do the unthinkable in the name of an ideal. It set Abraham Lincoln on the path to greatness and millions of slaves on the road to freedom.The book introduces us to a heretofore little-known cast of Civil War heroes &; among them an acrobatic militia colonel, an explorer&;s wife, an idealistic band of German immigrants, a regiment of New York City firemen, a community of Virginia slaves, and a young college professor who would one day become president. Adam Goodheart takes us from the corridors of the White House to the slums of Manhattan, from the mouth of the Chesapeake to the deserts of Nevada, from Boston Common to Alcatraz Island, vividly evoking the Union at this moment of ultimate crisis and decision.