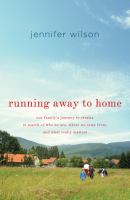 Running away to home Our family's journey to Croatia in search of who we are, where we came from, and what really matters

In thinking about her suburban life, epitomized by refereeing two arguing kids in a Target shopping cart while balancing a Starbucks, Wilson thinks, "If this is the American dream it kinda sucks." To refocus her family and connect with ancestors, she uproots her Iowa household and relocates to the mountainous, two-road village of Mrkopalj, Croatia. For the next four months, they adjust to the Balkan speed of life, in which rooms scheduled for completion in four days remain unfinished for weeks, meals of meat come with a side of meat, a language of consonants is marked with guttural accents, and they discover what they'd lost in the melee of their breakneck American lives: family. Wilson's memoir isn't so much about assimilating to Croatian culture as it is about finding family and, therefore, acceptance in unlikely places. A fun-filled, revealing peek into the Croatian countryside nevertheless, it will be enjoyed by travelogue lovers and admirers of Peter Mayle's A Year in Provence (1989) and Frances Maye's Under the Tuscan Sun (1996). Copyright 2011 Booklist Reviews.

Many Americans long for a family trip around the world or a stint abroad. Travel writer Wilson, her architect husband, and their two small children spent a family sabbatical in Mrkopalj, Croatia, an unlikely destination for most folks but the birthplace of Wilson's great-grandparents. Wilson and family arrived in the village speaking little Croatian but soon became part of the community. She relates how they explored the area, tracked down distant relatives, and became immersed in the traditions of daily life. In this village, people grow a year's worth of potatoes, survive on sausage and alcohol, and work together to chop wood, roast sheep, celebrate, and survive. The scars of hardship and wars are ever present in Mrkopalj, and Wilson reflects on how different her life has been thanks to her relatives who came to America. What she finds in Mrkopalj is a firm connection to family: her own, those who left, and those who remained. VERDICT This thoughtful, amusing tale reads like a novel and will have wide appeal. [See Prepub Alert, 4/25/11.]—Melissa Stearns, Franklin Pierce Univ. Lib., Rindge, NH [Page 123]. (c) Copyright 2011. Library Journals LLC, a wholly owned subsidiary of Media Source, Inc. No redistribution permitted.

After the 2008 crash wiped out half of her family's investments, 30-something freelance writer Wilson finally decided to do something about her growing dissatisfaction with her overscheduled, materialistic Starbucks existence. In her funny and heartfelt memoir, she packs up her husband and two young children from Des Moines, Iowa, with the plan to live a simpler, more connected life in the ancestral home in Croatia and to learn about her immigrant story. A century after her maternal great-grandparents left, Wilson and her family arrive in Mrkopalj (MER-koe-pie), near the Adriatic Sea. It's home to 800 people, many of whom only speak an ancient dialect of Croatian, and who have a short list of things they love: liqueur, sausage, family, God, and the abundant surrounding nature. Wilson's husband and children adapt quickly, but Wilson, the very relatable supermom, can't easily turn off that switch and just enjoy getting reacquainted with her family. Despite the language and cultural barriers, the locals prove invaluable and embrace the quartet, acting as translators, guides, and historians, helping her find the old house, locating nearby living relatives, and teaching the author her first Croatian recipes, giving Wilson the roots she came seeking. (Oct.) [Page ]. Copyright 2011 PWxyz LLC

Documents the experiences of a family that set aside their unfulfilling, over-scheduled lives in the American Midwest for a sabbatical in a tiny Croatian mountain village, where for several months they reconnected with the author's family, herded sheep and lived according to local customs. 40,000 first printing.

A middle class, Midwestern family in search of meaning uproot themselves and move to their ancestral village in Croatia"We can look at this in two ways," Jim wrote, always the pragmatist. "We can panic and scrap the whole idea. Or we can take this as a sign. They're saying the economy is going to get worse before it gets better. Maybe this is the kick in the pants we needed to do something completely different. There will always be an excuse not to go…"And that, friends, is how a typically sane middle-aged mother decided to drag her family back to a forlorn mountain village in the backwoods of Croatia.So begins the author's journey in Running Away to Home. Jen, her architect husband, Jim, and their two children had been living the typical soccer- and ballet-practice life in the most Middle American of places: Des Moines, Iowa. They overindulged themselves and their kids, and as a family they were losing one another in the rush of work, school, and activities. One day, Jen and her husband looked at each other-both holding their Starbucks coffee as they headed out to their SUV in the mall parking lot, while the kids complained about the inferiority of the toys they just got-and asked themselves: "Is this the American dream? Because if it is, it sort of sucks."Jim and Jen had always dreamed of taking a family sabbatical in another country, so when they lost half their savings in the stock-market crash, it seemed like just a crazy enough time to do it. High on wanderlust, they left the troubled landscape of contemporary America for the Croatian mountain village of Mrkopalj, the land of Jennifer's ancestors. It was a village that seemed hermetically sealed for the last one hundred years, with a population of eight hundred (mostly drunken) residents and a herd of sheep milling around the post office. For several months they lived like locals, from milking the neighbor's cows to eating roasted pig on a spit to desperately seeking the village recipe for bootleg liquor. As the Wilson-Hoff family struggled to stay sane (and warm), what they found was much deeper and bigger than themselves.