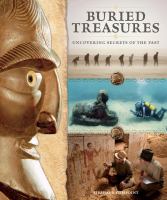 Buried treasures Uncovering secrets of the past

Showcasing the work of a specialist in archaeological photography, this loosely themed album offers a broad range of eye candy for fans of ancient artifacts, fossils, remote natural locales, and rare animals. Each of the 14 shoots places viewers on location with a French (mostly) explorer or scientist—from Jean-Yves Empereur (sunken Alexandria) and Giuseppe Orifici (Easter Island) to Jean-Louis Etienne (precise benchmark measurements of Arctic ice) and Michel Brunet (earliest proto-human fossils). Confined to captions and a few introductory paragraphs, the text supplies useful background along with the occasional contradiction (the number of stone moai on Easter Island is 887 on one page and 1,200 on another) or dispensable generality. The photos are far more likely to command attention, being a dramatically lit, sharply reproduced, and tellingly angled array of close-ups, landscapes, views of scientists at work, composite images, and, in one section, live-action shots of thong-clad athletes reenacting ancient Olympic games. Though it's not a prime source of research material, casual browsers will consider this book a real find. Copyright 2011 Booklist Reviews.

Photographer Compoint offers a striking survey of archeological discoveries and explorations into living mysteries. Twenty-five feet underwater, divers hover near a statue of a sphinx, a remnant of the ancient city of Alexandria; in southern Egypt, researchers unearth mummified bodies from tombs near the Kharga Oasis; a guide tracks and discovers the elusive blue bear in the Alaskan wilderness; and a team of paleontologists reconstruct the bones of the Baluchitherium, "the largest land-based animal that had ever lived." Compoint portrays the meticulous nature of excavation, transportation, and preservation of precious artifacts, while capturing the adrenaline-pumping excitement of piecing together mysteries past and present. Ages 9–up. (May) [Page ]. Copyright 2010 PWxyz LLC

Gr 4–8—A French photographer briefly introduces a variety of archaeological discoveries from around the world. The primary focus is on ancient sites, some fairly well-known such as Pompeii and Easter Island, while others are a bit more obscure, including Cahuachi, the site of giant drawings in Peru and Chile, and Zeugma, a site in Turkey now underwater due to recent dam construction. A more cryptic inclusion is the glacier bear or "mythic blue bear" from Alaska, as it is neither ancient nor a buried treasure. Entries are generally four to six pages, with beautiful color photographs of artifacts, archaeologists at work, and the surrounding areas; an introduction; and lengthy photo captions. The information is fairly generic, almost cursory at times, and really more of a teaser than anything else. The layout is attractive with large, glossy pages that highlight the photographs and could attract general browsers. Short biographies on each of the archaeologists are included, but no other source material or further information is provided. Libraries looking for a coffee-table book with some interesting tidbits to tantalize their readers may find this a good choice, but report writers or serious enthusiasts will have to look elsewhere.—Jody Kopple, Shady Hill School, Cambridge, MA [Page 113]. (c) Copyright 2010. Library Journals LLC, a wholly owned subsidiary of Media Source, Inc. No redistribution permitted.

An acclaimed photographer follows the work of numerous archaeologists as they uncover the secrets of lost civilizations, mythical beasts and mysterious treasures from around the globe that shaped past cultures.

Explores archaeological sites around the world as they uncover mummies, a Roman city preserved in ash, and the largest land-based mammal.

Through the captivating images of acclaimed photographer Stéphane Compoint,Buried Treasures takes readers on a worldwide exploration with today's most esteemed archaeologists as they search for traces of civilizations presumed lost forever and ancient animals that once roamed the earth.Mysterious colossal statues found on a remote Pacific island, a mythic bear covered in blue fur, a whole city wiped out by a volcano--these are just a few of the amazing discoveries showcased here. From sweltering deserts to the frigid North Pole to an ancient, underwater city, readers will follow scientists as they uncover the secrets of our past. Whether it's been dug up, lifted out of the water, or reimagined from extensive research, each of these treasures is a testament to the wealth and diversity of cultures that have come before and that have shaped ours.Praise for Buried Treasures“There’s such variety of image and perspective in Stéphane Compoint’s dazzling book.” –Wall Street Journal“A real find.” –Booklist“Photographer Compoint offers a striking survey of archeological discoveries and explorations into living mysteries. He portrays the meticulous nature of excavation, transportation, and preservation of precious artifacts, while capturing the adrenaline-pumping excitement of piecing together mysteries past and present.” –Publishers Weekly