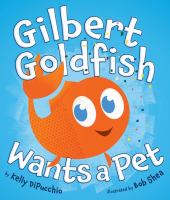 Gilbert has everything a goldfish could want except a pet of his own, but none of the animals who come near his fishbowl seem quite right until Fluffy, with his long tail and whiskers, appears.

Happy with his fishbowl castle and the shower of tasty flakes that fall from the "sky" every morning, Gilbert has nonetheless long yearned for a pet—and so is delighted by the arrival of a frisky dog. After a weary week of constant barking, though, he is glad when the dog is replaced by a much quieter mouse—who scuttles off after realizing that Gilbert isn't a piece of cheese. Next comes a housefly, who seems more sociable but ends up flattened by a swatter. Gilbert's world barely extends beyond his bowl, but Shea's big, brightly colored graphic-style scenes fill in the details, switching back and forth from close-ups to broader views. Children, along with Gilbert, are subjected to a real emotional roller-coaster ride by the succession of companions, which reaches its most suspenseful peak with the ominous arrival of a final pet (seen at first only in shadowy silhouette) with short ears and whiskers. But fear not: a final twist leads to a happy resolution. Copyright 2011 Booklist Reviews.

The well-worn premise of longing for the ideal pet gets a quirky tweak in DiPucchio's (Grace for President) story, which plays out humorously in Shea's (Dinosaur vs. the Potty) free-wheeling digital illustrations. Limited to his fishbowl, Gilbert can't do any searching, but he eagerly watches as potential pets approach. The arrival of a friendly, barking dog initially delights Gilbert (his owners appear to be dog-sitting), but he "never dreamed his pet would be so noisy." Next, a mouse appears and excitedly sniffs at the bowl, thinking Gilbert is a chunk of cheddar, then runs off when she realizes her error. Kids with a dark sense of humor will appreciate the second half of the book: another candidate—an amiable fly—has an unfortunate encounter with a fly swatter, and DiPucchio builds tension regarding the identity of the final "pet," which has a "long tail and wiry whiskers" and is slyly pictured in silhouette at first. Shea's bright, high-contrast artwork has a TV cartoon vibe and is in playful sync with the tale, which ends happily for all (except for the fly). Ages 3–5. (June) [Page ]. Copyright 2010 PWxyz LLC

PreS-Gr 1—At first glance, it would seem that Gilbert Goldfish has it made: castle, treasure chest, and a steady supply of tasty flakes falling from the sky into his bowl. But sadness overwhelms him. Gilbert's deepest desire is to have a pet of his own, to care for and love. Finding the right one is no easy task for a goldfish, though. The visiting dog is too loud, the mouse too rude (he shuns Gilbert once he determines that the fish is not a big chunk of cheddar), and the fly—well, what happens to the fly is too tragic to talk about. Finally, Gilbert thinks he has found the perfect pet, but readers may fear for his safety. Will all end in happiness or a calamity? The clever text stands on its own, but Shea's bold, expressive illustrations elevate this title to a higher plane. Wavy orange endpapers establish the watery setting and bright palette. Gilbert exudes emotion, whether love, horror, or sadness. With its mix of humor, mild shock (that fly again), and surprise ending, Gilbert Goldfish is a perfect choice for storytime and bedtime.—Suzanne Myers Harold, Multnomah County Library System, Portland, OR [Page 64]. (c) Copyright 2010. Library Journals LLC, a wholly owned subsidiary of Media Source, Inc. No redistribution permitted.

Gilbert has everything a goldfish could want except a pet of his own, but none of the animals who come near his fishbowl seem quite right until Fluffy, with his long tail and whiskers, appears.

Enjoying his fishbowl castle, treasure chest and endless supply of fish flakes, Gilbert the goldfish longs for a companion and is astonished by a search that involves loud barking, quiet buzzing and a giant whiskered surprise. By the best-selling author of Grace for President.

Gilbert has almost everything his fishy heart could desire: a castle, a chest filled with treasure, and food that falls from the sky. But there's one BIG thing missing from his life: a pet. And so begins Gilbert's harrowing search for the perfect fishbowl companion - a search filled with loud barking, quiet buzzing, and one giant whiskered surprise! With snappy, rhythmic text and the most irresistible goldfish in picture book history, this tale of fish woe and triumph will make readers long for a pet as lovable as Gilbert.Watch a Video