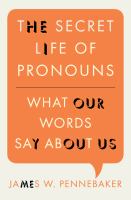 The secret life of pronouns What our words say about us

Draws on groundbreaking research in computational linguistics to explain what language choices reveal about feelings, self-concept, and social intelligence, in a lighthearted treatise that also explores the language personalities of famous individuals.

Why does a truth-teller use the pronoun I more frequently than a liar? By exploring this sort of question—and relying on potent new computer technologies for analyzing language—Pennebaker transforms simple words (pronouns, prepositions, articles) into revealing windows into the emotions and social relations of speakers and writers using them. Readers learn why men use more prepositions but fewer pronouns than women, why upper-class speakers use more nouns but fewer verbs than working-class speakers, and why people with strong social skills rely heavily on conjunctions. More broadly, readers see how simple function words ("stealth words") create the threads that both hold our social fabric together and create tensions in that fabric. Though he draws insights from brain-imaging research into the neurological structures that govern linguistic behavior, Pennebaker keeps his focus on the social psychology of language, showing how that psychology plays out at the personal level among friends, neighbors, and lovers, and at the national level among prominent politicians and media commentators. An extraordinary look at ordinary words. Copyright 2011 Booklist Reviews.

Pennebaker (social psychology, Univ. of Texas) offers a breezy retelling of his academic work on the information provided by pronouns and other function words--he calls them "stealth words." For many years, the author and a legion of his students have been doing large-scale computer analysis of stealth words in a wide variety of texts and transcripts--from The Federal Papers to blogs. The research reveals how function-word use correlates with status, age, gender, emotional immediacy, and even truthfulness. Some results are what one might expect and some are surprising, and many of the experiments are quite ingenious. In the book's ten chapters, the author gives some background and recounts his studies of the stealth grammar of power, emotion, dissimulation, leadership, love, and community. He notes early on that the book may "disappoint or infuriate" serious linguists. In a way, he is right. The exposition often does a disservice to the research that underlies much of the work, and this reviewer found himself wanting things tied up more neatly. Still, the book makes one think about pronouns, auxiliaries, adverbs, and articles in a new way. Summing Up: Highly recommended. All readers. General Readers; Lower-division Undergraduates; Upper-division Undergraduates; Graduate Students; Researchers/Faculty; Two-year Technical Program Students; Professionals/Practitioners. E. L. Battistella Southern Oregon University Copyright 2012 American Library Association.

In this intriguing treatise on computational linguistics, Pennebaker (Writing to Heal), chair of psychology at the University of Texas–Austin, probes innocuous "function words"—such as pronouns, prepositions, and articles—for clues to hidden states of mind. Deploying computer analyses of word-use frequency, he conducts an exercise in psychological and demographic profiling by means of verbal tell-tales: people who overuse articles, nouns, prepositions, and the word "we," for example, tend to be old, male, high-status, and cheerful, while people who overuse pronouns, verbs, and the word "I" tend to be young, female, low-status, and depressed. Pennebaker's accessible, entertaining account dissects a riotous assortment of language samples, from presidential speeches and Shakespeare to Beatles songs and Lady Gaga tweets, expounding on everything from the self-absorbed "language of suicidal poets" to the circumlocutions of liars. He's not always trenchant—Osama bin Laden's rhetoric betrayed a "need for power," he reveals—and he's sometimes overly reductionist; he speculates that poets Robert and Elizabeth Barrett Browning's "tend to use function words similarly... may explain why the two were so attracted to one another," and then graphs their relationship. Still, Pennebaker's take on the unexpected importance of throw-away words is the kind of fun pop linguistics readers devour. B&w illus. (Aug.) [Page ]. Copyright 2010 PWxyz LLC

The author of Opening Up draws on groundbreaking research in computational linguistics to explain what our language choices reveal about feelings, self-concept and social intelligence, in a lighthearted treatise that also explores the language personalities of famous individuals. 40,000 first printing.

The author draws on groundbreaking research in computational linguistics to explain what language choices reveal about feelings, self-concept, and social intelligence, in a lighthearted treatise that also explores the language personalities of famous individuals.

Draws on groundbreaking research in computational linguistics to explain what language choices reveal about feelings, self-concept, and social intelligence, in a lighthearted treatise that also explores the language personalities of famous individuals.

We spend our lives communicating. In the last fifty years, we've zoomed through radically different forms of communication, from typewriters to tablet computers, text messages to tweets. We generate more and more words with each passing day. Hiding in that deluge of language are amazing insights into who we are, how we think, and what we feel.In The Secret Life of Pronouns, social psychologist and language expert James W. Pennebaker uses his groundbreaking research in computational linguistics-in essence, counting the frequency of words we use-to show that our language carries secrets about our feelings, our self-concept, and our social intelligence. Our most forgettable words, such as pronouns and prepositions, can be the most revealing: their patterns are as distinctive as fingerprints. Using innovative analytic techniques, Pennebaker X-rays everything from Craigslist advertisements to the Federalist Papers-or your own writing, in quizzes you can take yourself-to yield unexpected insights. Who would have predicted that the high school student who uses too many verbs in her college admissions essay is likely to make lower grades in college? Or that a world leader's use of pronouns could reliably presage whether he led his country into war? You'll learn why it's bad when politicians use "we" instead of "I," what Lady Gaga and William Butler Yeats have in common, and how Ebenezer Scrooge's syntax hints at his self-deception and repressed emotion. Barack Obama, Sylvia Plath, and King Lear are among the figures who make cameo appearances in this sprightly, surprising tour of what our words are saying-whether we mean them to or not.