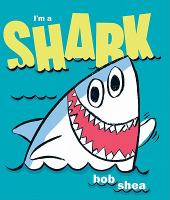 A boastful shark is not afraid of anything, which impresses his underwater friends until they ask about spiders.

I'm a shark! Aren't I awesome! goes the first line of Shea's latest, and it pretty much sums up the whole package. A grinning shark—drawn in what looks like the fewest strokes possible, to comic effect—boasts in front of his littler friends, a crab and a fish, how nothing scares him. Allergy shots? Nope. (Though there are a few tears there.) Scary movies? Nuh-uh. (Though he is sort of hiding behind his popcorn.) An onslaught of beasts are imagined—a dinosaur, a squid, a bear—but the shark dispels each idea with a burst of braggadocio. Shea's masterstroke is the rather quiet way he works in the shark's fear of spiders: The squid isn't a spider dressed as a squid, is it? That's how they get you! After several rounds of qualifiers make darn sure there are no spiders involved in any of these theoreticals, the shark returns to his overconfident declarations. A sea-blue background alternates to brighter colors in key moments, giving the book an even zanier overall palette. Good for non-scaredy-cats everywhere. Copyright 2011 Booklist Reviews.

In the midst of bragging about his fierce reputation, a shark reveals his insecurities. "If there were a dinosaur here... you know what he would be? Scared," grins the shark. "What about a creepy spider...?" asks a red crab. The shark's toothy smile turns to an anxious frown. "Creepy spider! Yuck! Is it on me?" he shudders, until reassured that no spiders are near. The shark scoffs at fearsome things—the dark, a squid, a bear—yet quakes at the mere mention of spiders ("SPIDERS? Who said I was afraid of spiders?"). Shea styles the conversation as playground one-upmanship, with the shark in the neurotic kingpin role. The goggle-eyed sea creatures, painted in rough swaths of black ink on saturated backdrops, are associated with distinct typefaces to identify the speakers (bold white for the shark, black for the others). Suggestions of spiders aside, Shea's shark has the unbridled confidence of the hero of his Dinosaur vs. Bedtime. It's almost impossible not to imagine the shark facing off against the egotistical squid of Kevin Sherry's I'm the Biggest Thing in the Ocean for undersea supremacy. Now that's scary. Ages 3–6. (May) [Page ]. Copyright 2010 PWxyz LLC

PreS-Gr 1—This shark is not afraid of shots (delivered by a swordfish), scary movies (a color photo shows a young boy fishing in a pond), or even dinosaurs—if they were still around. Shark's weakness soon becomes evident when he mistakes multiple creatures and lures for spiders, of which he's terrified. He even claims that he can make a giant squid ink himself in fear, but a spider would make him "swim away as fast as my fins would take me. That's not scared—that's smart." Finally, the braggart asks his fish and crab friends what makes them afraid, and, when they say sharks, he ends the tale with, "That's silly." The oversize but spare drawings of a boastful young shark declaring his bravery guarantee giggles. This nonsensical story is a tad long, but it is a good jumping-off point for discussing fears.—Gay Lynn Van Vleck, Henrico County Library, Glen Allen, VA [Page 153]. (c) Copyright 2010. Library Journals LLC, a wholly owned subsidiary of Media Source, Inc. No redistribution permitted.

A boastful shark is not afraid of anything, which impresses his underwater friends until they ask about spiders.

Shark's not afraid of anything.

But there is one thing that even Shark fears. . . . Can you guess what it is?