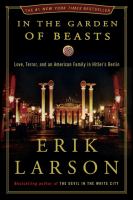 In the garden of beasts Love, terror, and an American family in Hitler's Berlin

The bestselling author of "Devil in the White City" turns his hand to a remarkable story set during Hitler's rise to power. The time is 1933, the place, Berlin, when William E. Dodd becomes America's first ambassador to Hitler's Germany in a year that proved to be a turning point in history.