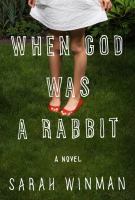 When God was a rabbit

Traces the evolving bond of love and secrets between a woman and her brother, a relationship marked by family ties in Europe and America, a secretive friend, and historical events from more than three decades.

*Starred Review* Elly never feels complete without her older brother, Joe. It's Joe who learns what happened between 5-year-old Elly and the 80-year-old man next door, marking her life, and then gets her a "proper friend," a large Belgian hare Joe names God, which comforts Elly until the rabbit's untimely death. Solitary English children, Elly and Joe each find, then lose, a fast friend. Charlie, Joe's rugby mate, whom, when a teen, he loves deeply, moves to Dubai with his divorced father, and Jenny Penny, Elly's quirky schoolmate, is left behind after Elly and Joe's family moves to Cornwall. Both will be found again as the years progress to Elly's midthirties. But no bare-bones plot summary can do justice to this wonderfully wise and compellingly readable tale of love and friendship in all their forms, of family uncircumscribed by biological bonds, and of loss worse than death—all laced with humor that can border on black. In crisp prose, English actress Winman vividly limns the characters, including Elly playing the blind innkeeper and Jenny the octopus in their school's Christmas pageant; Arthur, the boarder who becomes kin, with his yogi's prediction of when and how he will die; and the tortured aftermath of 9/11. A remarkable first novel, worth savoring. Copyright 2011 Booklist Reviews.

Over a 30-year time span, Elly and her older brother, Joe, experience everything the late 20th century has to throw at them, from child molestation to marital upheaval, cancer, and, finally, the terror of 9/11. Joe goes down the rabbit hole of depression when he loses the early love of his life, Charlie, who is abducted and tortured after his father gets a contract to work in the Middle East. When Elly also suffers the loss of a neighborhood friend, Joe comforts her with the gift of a pet Belgian hare whom they decide to call "God." Their father's big win in the football pools transforms the family from middle-class suburbanites to wealthy eccentrics as they leave their familiar Essex surroundings and move to a wooded estate in Cornwall. VERDICT Despite the gravity of events, Winman pulls a good number of rabbits from her hat in a picaresque coming-of-age tale where characters disappear then shockingly reappear. This affecting and original debut is recommended for most public libraries. [See Prepub Alert, 11/22/10.]—Barbara Love, Kingston Frontenac P.L., Ont. [Page 58]. (c) Copyright 2010. Library Journals LLC, a wholly owned subsidiary of Media Source, Inc. No redistribution permitted.

Winman debuts with a heartbreaking story of the secrets and hopes of a sister and brother who share an unshakable bond. Elly and her older brother, Joe, appear to be just like all the other kids in mid-1970s Essex, U.K., but, as is often the case, shocking secrets lurk below the surface for the siblings and Elly's best friend, Jenny Penny—one has been sexually abused, another has an alcoholic and promiscuous mother, another is homosexual—and the weight of bearing each other's traumas erupts in hard to watch ways. As the years go on, each moves forward; for Elly and Joe, this is more easily accomplished, as their family moves away from Essex and Joe's secret is brought to light, relief Elly doesn't receive until much later. As the story winds through time and across the Atlantic, the trio and their families are rocked by 9/11, leading to a final twist that strains belief before settling into acceptable inevitability. Winman shows impressive range and vision in breaking out of the muted coming-of-age mold, and the narrative's intensity will appeal to readers who like a little gloom. (May) [Page ]. Copyright 2010 PWxyz LLC

An American release of an internationally successful debut novel traces the evolving bond of love and secrets between a woman and her brother, a relationship marked by family ties in Europe and America, a secretive friend and historical events from more than three decades. 30,000 first printing.

Traces the evolving bond of love and secrets between a woman and her brother, a relationship marked by family ties in Europe and America, a secretive friend, and historical events from more than three decades.

This is a book about a brother and a sister. It's a book about secrets and starting over, friendship and family, triumph and tragedy, and everything in between. More than anything, it's a book about love in all its forms.In a remarkably honest and confident voice, Sarah Winman has written the story of a memorable young heroine, Elly, and her loss of innocence-a magical portrait of growing up and the pull and power of family ties. From Essex and Cornwall to the streets of New York, from 1968 to the events of 9/11, When God Was a Rabbit follows the evolving bond of love and secrets between Elly and her brother Joe, and her increasing concern for an unusual best friend, Jenny Penny, who has secrets of her own. With its wit and humor, engaging characters whose eccentricities are adroitly and sometimes darkly drawn, and its themes of memory and identity, When God Was a Rabbit is a love letter to true friendship and fraternal love.Funny, utterly compelling, fully of sparkle, and poignant, too, When God Was a Rabbit heralds the start of a remarkable new literary career.