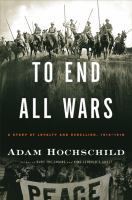 Delving into prowar and antiwar opinion in Britain during WWI, Hochschild (King Leopold's Ghost, 1998) humanizes responses to the conflict through biographical accounts of British soldiers, politicians, and radicals. For example, he contrasts John French, commander of the British Expeditionary Force in France, with his sister, a social activist who opposed the war, showing how the causes they pressed in prewar Edwardian England presaged their conduct during WWI. Linking his diverse cast of characters, which includes antiwar Bertrand Russell and prowar writers John Buchan and Rudyard Kipling, Hochschild presents a WWI narrative deriving from military histories by Hew Strachan and John Keegan and highlights the fact that it was belief in the war's futility, folly, or immorality that moved its opponents to action. Socialists, suffragettes, pacifists, and conscientious objectors who preferred prison to compromising their principles populate the book, and Hochschild sympathizes with them rather than British leaders who prosecuted the war. However much that perspective affects the work as history, it strengthens its appeal to those interested in and inspired by past antiwar movements. Copyright 2011 Booklist Reviews.

At the end of this book, Hochshild (narrative writing, Graduate Sch. of Journalism, Univ. of California, Berkeley; King Leopold's Ghost: A Story of Greed, Terror, and Heroism in Colonial Africa) writes that if only one event of the 20th century could be "undone," it should be World War I; many readers will agree with this statement. Covering almost exclusively the British perspective, he here tells the story of World War I through the eyes of its most prominent supporters and detractors. Hochschild's own sympathies lie with the conscientious objectors, socialists, and pacifists who opposed the war but were drowned out by the general public, politicians, and generals. The author is at his best when he describes horrible ironies of the war, such as a Swiss-arranged trade of essential war materials between Great Britain and Germany so the governments could more efficiently send their own soldiers to be slaughtered. VERDICT This book shares a similar thesis with David Stevenson's Cataclysm: The First World War as Political Tragedy and will be appreciated by anyone interested in the history of World War I or the stories of war dissenters.—Michael Farrell, Reformed Theological Seminary Lib., Oviedo, FL [Page 101]. (c) Copyright 2010. Library Journals LLC, a wholly owned subsidiary of Media Source, Inc. No redistribution permitted.

WWI remains the quintessential war—unequaled in concentrated slaughter, patriotic fervor during the fighting, and bitter disillusion afterward, writes Hochschild. Many opposed it and historians mention this in passing, but Hochschild, winner of an L.A. Times Book Award for Bury the Chains: Prophets and Rebels in the Fight to Free an Empire's Slaves, has written an original, engrossing account that gives the war's opponents (largely English) prominent place. These mostly admirable activists include some veteran social reformers like the formidable Pankhursts, who led violent prosuffrage demonstrations from 1898 until 1914, and two members of which enthusiastically supported the war while one, Sylvia, opposed it, causing a permanent, bitter split. Sylvia worked with, and was probably the lover of, Keir Hardie, a Scotsman who rose from poverty to found the British Labor party. Except for Bertrand Russell, famous opponents are scarce because most supported the war. Hochschild vividly evokes the jingoism of even such leading men of letters as Kipling, Conan Doyle, H.G. Wells, and John Galsworthy. By contrast, Hochschild paints equally vivid, painful portraits of now obscure civilians and soldiers who waged a bitter, often heroic, and, Hochschild admits, unsuccessful antiwar struggle. (May) [Page ]. Copyright 2010 PWxyz LLC

An epic chronicle of the first World War places an emphasis on the moral dilemmas raised by the war's critics, citing the achievements and associations of famous detractors while exploring how the war's lessons have particular relevance in today's world. By the National Book Award finalist author of King Leopold's Ghost. 75,000 first printing.

Presents a history of World War I, focusing on the moral conflict between the proponents of the war and its critics in Great Britain.

World War I stands as one of history’s most senseless spasms of carnage, defying rational explanation. In a riveting, suspenseful narrative with haunting echoes for our own time, Adam Hochschild brings it to life as never before. He focuses on the long-ignored moral drama of the war’s critics, alongside its generals and heroes. Thrown in jail for their opposition to the war were Britain’s leading investigative journalist, a future winner of the Nobel Prize for Literature, and an editor who, behind bars, published a newspaper for his fellow inmates on toilet paper. These critics were sometimes intimately connected to their enemy hawks: one of Britain’s most prominent women pacifist campaigners had a brother who was commander in chief on the Western Front. Two well-known sisters split so bitterly over the war that they ended up publishing newspapers that attacked each other. Today, hundreds of military cemeteries spread across the fields of northern France and Belgium contain the bodies of millions of men who died in the “war to end all wars.” Can we ever avoid repeating history?

In a riveting, suspenseful narrative with haunting echoes for our own time, Adam Hochschild brings WWI to life as never before, focusing on the long-ignored moral drama of its critics, alongside its generals and heroes. A brilliant new history of the Great War that raises the eternal question of why such a terrible war was ever fought.