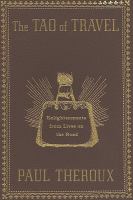 The tao of travel Enlightenments from lives on the road

A collection of writings from Paul Theroux's fifty years of travel. Included are writings from other travelers such as Charles Dickens, Eudora Welty, Anton Chekhov, Ernest Hemingway and many others.

As a travel writer, Theroux has few contemporary rivals and no peers. His many books have hammered home the axiom that in meaningful travel the destination is never as significant as the journey itself. Theroux's descriptive faculties and his deft, if often pitiless, eye for the insincere and the dishonest in the array of characters he encounters on his worldwide voyages leave readers indelibly haunted. Theroux's admirers will welcome this anthology of those travel accounts that he himself has found admirable or influential or enlightening for his own literary achievements. A fecund resource for anyone who might wish to follow in Theroux's footsteps, this is a remarkably perceptive and incisive annotated bibliography of travel books. Having surveyed this array of literature and having pursued the peripatetic existence, Theroux arrives at a destination: 10 brief commandments that serve as a vade mecum for travel and for life itself. Copyright 2011 Booklist Reviews.

Theroux (Ghost Train to the Eastern Star: On the Tracks of the Great Railway Bazaar) is considered the doyen of travel writers. Despite a promising concept, his latest book is not his best. Theroux takes excerpts of great travel writing (from the likes of Samuel Johnson, Evelyn Waugh, Henry David Thoreau, Mark Twain, Graham Greene, and Ernest Hemingway) and sprinkles them in 27 thematic chapters—e.g., "Fears, Neuroses, and Other Conditions," "Travel as an Ordeal," "Travelers' Bliss," and "Classics of a Sense of Place"—which, unsurprisingly, have little to do with Taoism. The first chapter, which is made up of snippets from Theroux's many books, is tedious and forgettable. It is only when the chapters include longer texts from other writers that one gets a better feel for the travelers and their situations. VERDICT True Theroux fans will be happy to add this title to their collections. Others may enjoy excerpts and perhaps be inspired to read the original works, but this is not a book for the casual reader of travel writing. [See Prepub Alert, 11/15/10.]—Lee Arnold, Historical Soc. of Pennsylvania, Philadelphia [Page 91]. (c) Copyright 2010. Library Journals LLC, a wholly owned subsidiary of Media Source, Inc. No redistribution permitted.

Travel maestro Theroux (The Great Railway Bazaar) conducts a rambling tour of the genre in this diverting meditation on passages from his own and other writers' works. Several chapters spotlight underappreciated travel writers from Samuel Johnson to Paul Bowles, while others explore themes both profound and whimsical. There are classic set-piece literary evocations, including Thoreau on the hush of the Maine woods and Henry James on the miserable pleasures of Venice. A section on storied but disappointing destinations fingers Tahiti as "a mildewed island of surly colonials"; travel epics—shipwrecks, Sahara crossings, Jon Krakauer's duel with Mount Everest—are celebrated; exotic meals are recalled (beetles, monkey eyes, and human flesh, anyone?); and some writers, like Emily Dickinson, just stay home and write about that. The weakest section is a compendium of aphoristic abstractions—"Travel is a vanishing act, a solitary trip down a pinched line of geography to oblivion"—while the strongest pieces descry a tangible place through a discerning eye and pungent sensibility: "I do not think I shall ever forget the sight of Etna at sunset," Evelyn Waugh rhapsodizes; "othing I have seen in Art or Nature was quite so revolting." Photos. (May 26) [Page ]. Copyright 2010 PWxyz LLC

A literary handbook by the acclaimed author of Ghost Train to the Eastern Star celebrates a half-century of travel that intersperses excerpts from Theroux's works with selections that have inspired him as written by such authors as Vladimir Nabokov, Evelyn Waugh and Henry David Thoreau. 25,000 first printing.

Presents excerpts of the author's own work interspersed with literary travel writings selected by the author that celebrate the virtues and the joy of travel.

A collection of writings from Paul Theroux's fifty years of travel. Included are writings from other travelers such as Charles Dickens, Eudora Welty, Anton Chekhov, Ernest Hemingway and many others.

This attractive imitation leather bound volume presents collected excerpts from the works of famed travel writer and novelist Paul Theroux (The Great Railway Bazaar, Mosquito Coast). Taken from over forty years of travel experience, the texts offer a window into the author's philosophy of travel as well as his thoughts on the historical journeys of a variety of other authors. The brief entries are pleasant for browsing as well as reading straight through. The volume includes twenty-seven separate vignettes indexed by both people and places. Annotation ©2011 Book News, Inc., Portland, OR (booknews.com)

Paul Theroux celebrates fifty years of wandering the globe by collecting the best writing on travel from the books that shaped him, as a reader and a traveler. Part philosophical guide, part miscellany, part reminiscence, The Tao of Travel enumerates “The Contents of Some Travelers’ Bags” and exposes “Writers Who Wrote about Places They Never Visited”; tracks extreme journeys in “Travel as an Ordeal” and highlights some of “Travelers’ Favorite Places.” Excerpts from the best of Theroux’s own work are interspersed with selections from travelers both familiar and unexpected: Vladimir Nabokov           J.R.R. Tolkien Samuel Johnson               Eudora WeltyEvelyn Waugh                  Isak Dinesen Charles Dickens               James Baldwin Henry David Thoreau       Pico Iyer Mark Twain                     Anton Chekhov Bruce Chatwin                  John McPheeFreya Stark                      Peter Matthiessen Graham Greene                Ernest Hemingway The Tao of Travel is a unique tribute to the pleasures and pains of travel in its golden age.

A philosophical guidebook and collection of insights celebrating the joy of travel, chosen by eminent travel writer Paul Theroux