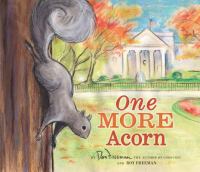 Earl the squirrel searches for acorns in the autumn in Washington, D.C.

In this blithe story begun by the late Don Freeman (Corduroy), the squirrel introduced in Earl the Squirrel searches for acorns he has stashed away in the parks of Washington, D.C., as winter approaches. A note from Roy Freeman explains that his father started this story while visiting the capital in late 1963, but was so devastated by President Kennedy's assassination that he abandoned the project. The son completed the manuscript and Jody Wheeler created additional art, ably replicating Freeman's wispy style. The airy pictures feature splashes of autumnal hues and loose images of the city's buildings and monuments. The narrative is equally buoyant: Earl "dashed like a furry flash" across a busy avenue and wonders if children on a field trip "are looking for acorns, too." Earl displays an amusing persnickety streak, toowhen a boy offers him the prize acorn Earl had been searching for, he thinks, "Well, I'm glad to hear it.... Since it was my acorn to begin with," and he bounces off several of the kids as he delivers the acorn to his waiting family. Ages 3up. (Sept.) Copyright 2010 PWxyz LLC

K-Gr 1—The celebrated creator of Corduroy (Viking, 1968) left behind scraps of this story, which his son has pieced together and completed. In Washington, DC, Earl the squirrel joins his park comrades in searching beneath orange leaves for stashes of hidden acorns to feed his wife and three kits. Unable to find the biggest acorn he hid during the summer, Earl braves traffic to cross Pennsylvania Avenue and cuts through to the Washington Monument, where scads of humans are gathered to watch a parade. A child's inconvenient meddling leads Earl to employ him as a stepping-stone to home. The 1960s style of Don Freeman's original inspiration stays true, but some scenes are significantly more detailed and complete, making for an unbalanced whole. Readers don't know the focus of the parade, and little actually happens. Earl's lack of emotional range makes investment in his success reserved at best.—Gay Lynn Van Vleck, Henrico County Library, Glen Allen, VA [Page 70]. (c) Copyright 2010. Library Journals LLC, a wholly owned subsidiary of Media Source, Inc. No redistribution permitted.

Earl the squirrel searches for acorns in the autumn in Washington, D.C. Includes author's note about the history of the book.

A never-before published picture book by the beloved, award-winning creator of Corduroy features Earl the squirrel searching for acorns in the autumn in Washington, D.C.; but more than an adorable story about a squirrel looking for that one last acorn, the book is a son's homage to his father, Don Freeman, who passed away in 1978.

Earl the squirrel searches for acorns in the autumn in Washington, D.C.

When beloved and award-winning picture-book author and illustrator Don Freeman died in 1978, his son, Roy, inherited his father's vast archive of art and stories. In that treasure trove, Roy recently discovered some artwork and a story set in Washington, D.C., about a squirrel gathering nuts for the winter. The project was promising but unfinished, so Roy decided to partner with his father-thirty years after his death-to bring the book to life. One More Acorn is more than an adorable, heartwarming story about a squirrel looking for that one last acorn-it's a son's homage to his father. And having an all-new original Don Freeman picture book is a true publishing event.