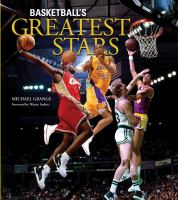 A history of the National Basketball Association, illustrated through the profiles of its top players, past and present. Also includes the histories of 30 franchises and three essays about the game.

"Photo-laden showcases of a sports' greatest players are fairly commonplace, but this one, compiled by Canadian sportswriter Grange, stands out from the rank and file for several reasons. First, Grange brings informed opinions and an engaging voice to his text, which effectively summarizes the careers of the basketball players he selects as the sport's 50 greatest stars and offers insightful analysis of what made them great. (No quibbles with his choices, either: no obvious oversights and a nice mix of contemporary and older stars.) Best of all, though, are the photos; beautifully reproduced, the four-color images jump off the pages, showing the various stars in signature shots (Kareem's sky hook; Michael, tongue extended, driving to the hoop; Dr. J hovering in midair). A sweet combination of superb browsing and surprisingly substantive commentary." Copyright 2010 Booklist Reviews.

Typical of many Firefly books, this is a colorful, picture-driven reading experience. Don't expect an exhaustive history of the NBA, but an interesting summary of stars and teams. After a brief history of U.S. pro basketball, the book serves as a who's who of the sport, with Grange (sports columnist, Globe and Mail, Toronto) selecting his top players in two categories, the "Best of the Best" and the "Best of the Rest," 50 players in all. These two sections, the meat of the book, offer biographies (two or three pages each) and statistics. One could quibble with some placements (e.g., this reviewer would put Steve Nash in the "Best of the Best"), but the 50 players included are a good overall selection. Add a section of brief histories of each franchise, a chapter on international competition, and a chapter on statistical analysis of the sport, and you have a fun experience for the reader. VERDICT Recommended for fans of the NBA who seek a quick reference to the best players the game has ever seen and for all libraries collecting accessible and colorful basketball books.—Todd Spires, Bradley Univ. Lib., Peoria, IL [Page 102]. (c) Copyright 2010. Library Journals LLC, a wholly owned subsidiary of Media Source, Inc. No redistribution permitted.

This beautiful volume presents the sportswriter's selection of basketball greats from all eras, a concise history of the game, profiles of the franchises, and even coverage of international basketball, as well as stats on each featured player, a remarkable effort for a game that originally "featured only 13 rules." Grange is a colorful writer, and his examination of the development of gurus, consultants, and the science of success is fascinating. Magic Johnson is described as " late bloomer who was off the radar at the University of Massachusetts...defining the rebel league with his majestic flights, the signature red-white-and-blue ball a grapefruit in his outstretched hands." Speaking of failing to stop Michael Jordan from scoring 63 points in a playoff game, Larry Bird said, "That was God disguised as Michael Jordan." New York Knicks star Bill Bradley has a different take on Bill Russell: "He waged psychological warfare, on and off the court. He would ignore an opposing rookie in a restaurant the night before a game so that the next night the rookie would try too hard to make an indelible impression." Jump for joy on this one. Photos. (Nov.) [Page ]. Copyright 2010 PWxyz LLC

Profiles fifty of the greatest basketball players of all time, including Kareem Abdul-Jabbar, Michael Jordan, and LeBron James, and provides guidelines for how basketball statistics are formulated throughout the years.

Profiles of the best NBA players provide a great history of the game.

Profiles of the best NBA players provide a great history of the game. Basketball is second of the top three elite professional sports, whose players command stratospheric salaries. The spectacular success of the NBA is based on its stars' performances, which excite fans game after game, championship after championship. Basketball's Greatest Stars features detailed profiles of the 50 greatest and most exciting players in basketball history. They're all here: the score-at-will centers, the quick-dishing guards and the take-it-to-the-hoop power forwards. The book also features the players whose star power has gone beyond the court into the culture of celebrity. Michael Grange includes action photographs that celebrate the play of every superstar past and present, and profiles of 30 franchises chart the league's rise to greatness. Some of the stars of the hardwood in the book are: Michael JordanMagic JohnsonLarry BirdBill RussellBob CousyJerry WestWilt ChamberlainJulius ErvingKareem Abdul-JabbarRick BarryShaquille O'NealLeBron JamesDirk NowitzkiKobe BryantTim DuncanKarl MaloneGrange also examines the sport in three insightful essays, covering the leading men and defining moments that have shaped the game, the international game and the changing nature and importance of statistical analysis. Basketball's Greatest Stars is a superb book for the fan and a compelling history of a great game.