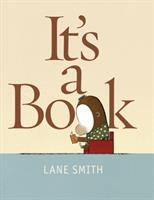 Smith throws down his gauntlet in the ongoing debate over digital versus print in this spare offering. A donkey (jackass) with a laptop and a monkey with a hardcover book discuss the merits of their preferred formats. "How do you scroll down?" the donkey asks. "Do you blog with it?" "Can you make the characters fight?" To each question, the monkey offers an answer that riffs on this small, square picture book's title. At one point, the monkey shoves a page into his companion's hands, showing a story about a pirate. "Too many words," the donkey responds, and he quickly transcribes the story as "LJS: rrr! K? lol! / JIM: :( ! :)." Unimpressed, the monkey continues to build his case until his big-eared mate converts to print so enthusiastically that he vows to keep reading. Although it is adults, not children, who will best appreciate the subject and satire here, the basic drama created by the characters' arguments may help this find an audience among kids, especially tech-savvy ones. Copyright 2010 Booklist Reviews.

Smith (Madam President) addresses e-literacy in his irreverent style, casting a donkey in the role of digital junkie and a gorilla as a literary type. The donkey fiddles with a laptop while the gorilla holds a novel. "What do you have there?" asks the techie, whose words are printed in ice blue, sans serif letters suggestive of a chat room. "It's a book," the ape answers, in a stately orange serif font. The donkey tests the gorilla's patience: "Can it text? Tweet? Wi-Fi?" (When he asks, "Where's your mouse?" a real one pops from beneath the gorilla's porkpie hat.) After the gorilla hands over Treasure Island, the donkey gripes, "Too many letters," and converts the scene to emoticons before getting hooked on the story. "I'll charge it up when I'm done!" he promises, at which the mouse squeaks, "It's a book, jackass." This smart-aleck retort, arguably justified because the donkey is a jackass in any sense of the word, urges readers to side with the scholarly gorilla. Meanwhile, Smith has the best of both worlds: his stylish drawings, sleek typography, and kid-friendly humor combine old media and new. Ages 6–up. (Sept.) [Page ]. Copyright 2010 Reed Business Information.

Gr 3–5—Smith jump-starts the action on the title page where readers meet the characters—a mouse, a jackass, and a monkey. The monkey's oval head creates an "o" in the word "book." Slapstick humor ensues in an armchair face-off when one character, reared on a diet of Web 2.0 and gaming, cannot fathom what to do with a book and slings a barrage of annoying questions, "Can you blog with it? How do you scroll down? Can you make the characters fight?" Readers know who is speaking by each animal's unique font type and color, achieving economy and elegance on each page. Exasperated, Monkey hands over the volume. Life, death, and madness, all in a single illustrated page of Treasure Island, draw Jackass in. He responds with a knee-jerk reaction ("too many letters") and hilariously reduces it to text speak, but his interest is piqued. He covets the book and readers watch him pore over it for hours. Repeated images of him transfixed, shifting left to right, up and down, ears upright, then splayed, and eyes wide open, fill a wordless spread and offer a priceless visual testimony to the focused interaction between readers' imaginations and a narrative. Mouse delivers the final punch line, which will lead to a fit of naughty but well-deserved laughter, and shouts of "Encore." A clever choice for readers, young and old, who love a good joke and admire the picture book's ability to embody in 32 stills the action of the cinema.—Sara Lissa Paulson, American Sign Language and English Lower School PS 347, New York City [Page 86]. Copyright 2010 Reed Business Information.

A donkey is curious about the book a monkey is reading, and wonders why it does not text, tweet, scroll, or blog, and why monkey enjoys the book so much even though it cannot do any of these things.

A donkey with a laptop computer and a gorilla with a printed book discuss the merits of their preferred formats.

Playful and lighthearted with a subversive twist that is signature Lane Smith, It's a Book is a delightful manifesto on behalf of print in the digital age. This satisfying, perfectly executed picture book has something to say to readers of all stripes and all ages.This title has Common Core connections.