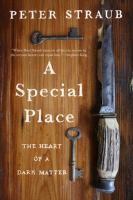 A special place The heart of a dark matter

A boy, Keith Hayward, is drawn to an irresistible fascination with death and the taking of life. His Uncle Till, who has led a shadowy career as local celebrity "Ladykiller," recognizes his nephew's nature and tutors him in the art of doing ill without getting caught.

Straub's fandom will soon feel a frisson of déjà vu reading this, his first singly published novella. It's an extract from Skylark (2009), the limited-edition long version of A Dark Matter (2010), which relates the backstory of the college student, Keith Hayward, sensationally killed at the novel's climax. By then, Keith is a sociopath on the verge of following his uncle's lead into serial murder. The novella lays out the course of his education for the trade by Uncle Till, right up to his—Keith's—first murder. To Keith, beginning at least at age 12, Till is utterly fascinating, but when the handsome, apparently footloose man returns the interest in the wake of a neighbor's suspicion that Keith has killed her cat and suggests that the boy find and use a special place for his possibly compromising pleasures, fascination becomes enthrallment. A lowering aura like that of the high-school scenes involving the hero's son in David Cronenberg's film A History of Violence broods over this immaculately written portrait of a maculate-to-the-max character in formation. Copyright 2010 Booklist Reviews.

This short but visceral read by a master of the horror genre (A Dark Matter; Ghost Story) ponders whether sociopathic behavior may be inheritable. Enthralled for years by the visits of his mysterious Uncle Till, troubled young Keith comes to recognize that he shares some unsavory characteristics with his handsome relative. Till immediately senses Keith's special needs and assures his nephew that any young man with Keith's rare and wonderful urges must discover a secret place in which to satisfy those needs. Keith's mother worries about him, but the boy is adept at diverting her concern. Part of the power of Straub's story lies in the banality of the setting and the fact that Uncle Till and his nephew might well be our neighbors. While there are no supernatural elements here, Straub effectively sustains a creepy atmosphere. The conclusion may be expected but is nevertheless unsettling. VERDICT This is high-quality disturbing horror. Recommended not only for horror fans but for those who appreciate outstanding writing.—Jonathan Pearce, California State Univ. at Stanislaus, Stockton [Page 84]. Copyright 2010 Reed Business Information.

Creepy to the core, this novella shines a terrible light on the backstory of Straub's acclaimed A Dark Matter (2010). Young Keith Hayward idolizes his charming, charismatic Uncle Till. When Keith's mother asks Till to talk to Keith after the boy is found dismembering a dead cat, Till recognizes a kindred spirit and begins to instruct Keith on smart, secret ways to pursue his evil endeavors. As the years pass, Keith grows older and bolder in his sadistic pleasures, and when Till comes back into town, Keith finds the perfect way to impress him. Vivid but never overly graphic or grotesque, Straub's words paint horrific pictures of two depraved men. The violence is minimal, but understood in the most subtle of ways. This beautifully horrifying, delightfully disturbing tale of a family tree of evil will stay with the reader long after the last page is done. (July) [Page ]. Copyright 2010 Reed Business Information.

Keith Hayward is a boy with an irresistible fascination with death and the taking of life, and his suave, shadowy Uncle Till is happy to foster his nephew's innermost nature, gleefully tutoring him in the art of doing evil without getting caught. By the best-selling author of Ghost Story. Reprint.

Keith Hayward is a boy with an irresistible fascination with death and the taking of life, and his suave, shadowy Uncle Till is happy to foster his nephew's innermost nature, gleefully tutoring him in the art of doing evil without getting caught.

A Special Place, Peter Straub’s first published novella, will come to stand as one of the author’s most deeply unsettling works of fiction. A rumination on the nature of evil, the story centers on a boy, Keith Hayward, who is drawn by his nature to an irresistible fascination with death and the taking of life. His father’s brother, the good-looking, suave Uncle Till—the infamous ladykiller, who has led a shadowy career as a local celebrity—recognizes his nephew’s innermost nature and gleefully tutors him in art of doing ill without getting caught.Even a cold-blooded sociopath must learn some lessons in survival, in seems, and Uncle Till is only happy to provide a tutorial, in the latest imaginative and disturbing work from one of America's most celebrated horror writers.

From the bestselling author of Ghost Story, Shadowland, and The Talisman, a novella-length rumination on the nature of evil.