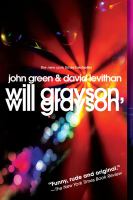 When two teens, one gay and one straight, meet accidentally and discover that they share the same name, their lives become intertwined as one begins dating the other's best friend, who produces a play revealing his relationship with them both.

*Starred Review* Two superstar authors pair up and really deliver the goods, dishing up a terrific high-energy tale of teen love, lust, intrigue, anger, pain, and friendship threaded with generous measures of comedy and savvy counsel. Though the ensemble cast revolves around Tiny Cooper, "the world's largest person who is really, really gay, and also the world's gayest person who is really, really large," the central characters are the two titular narrators, who share a name (but don't meet until partway through) and trade off alternate chapters. One Will has been Tiny's satellite for years but is starting to chafe at the role—especially after Tiny forcibly sets him up with Jane, an infuriatingly perfect match. The other, whose clinical depression is brilliantly signaled by an all-lowercase narrative and so intensely conveyed that his early entries are hard to read, sees at least a glimmer of light fall on his self-image after a chance meeting with Tiny sparks a wild mutual infatuation. The performance of an autobiographical high-school musical that Tiny writes, directs, and stars in makes a rousing and suitably theatrical finale for a tale populated with young people engaged in figuring out what's important and shot through with strong feelings, smart-mouthed dialogue, and uncommon insight. Copyright 2010 Booklist Reviews.

In alternating chapters, the authors track two teens, both named Will Grayson, who accidentally meet halfway through the novel, perhaps changing the trajectory of both of their lives. One Will is vintage Green: a smart nerd whose rules to live by include "don't care too much," with a scene-stealing sidekick—Tiny Cooper, a large, flamboyantly gay classmate intent on staging an autobiographical musical. The other will (lowercase throughout) is angry and depressed; the one bright spot in his existence is an online friendship with "Isaac." When will agrees to meet Isaac one night in Chicago, readers know nothing good will happen—and they will be wrong. A well-orchestrated big reveal takes the story in a new direction, one that gives (lowercase) will greater dimension. The ending is laudable but highly implausible. The journey to it is full of comic bits, mostly provided by the irrepressible Tiny, who needs his own novel. Frank sexual language—a shot at a bar "tastes like Satan's fire cock"—pushes this one to high school, where its message of embracing love in all its forms ought to find a receptive audience. Ages 14–up. (Apr.) [Page 54]. Copyright 2010 Reed Business Information.

Gr 9 Up—Will Grayson's best friend since fifth grade, nicknamed Tiny Cooper, is bigger than life in terms of his physical stature and his personality—the "world's largest person who is really, really gay." Tiny, while seeking the boy of his dreams, has been through the trauma of myriad short-lived romantic relationships and Will has supported him each time his heart is broken. Now, Tiny decides it's Will's turn. At first, Will resents Tiny's matchmaking efforts, but then an amazing coincidence that stems from it brings a new person into their lives. It's another teen named Will Grayson, who is sad and depressed, and captures Tiny's heart. While these and other relationships are connecting, intersecting, and eventually changing, Tiny writes and produces an autobiographical high school musical extravaganza that is really about life. On the night it premiers, everything comes full circle and further validates the presence of the Will Graysons. Based on the premises that "love is tied to truth" and "being friends, that's just something you are," this powerful, thought-provoking, funny, moving, and unique plot is irresistible. Told in alternating chapters from each Will Grayson's point of view (one in lower case, effectively individualizing identities), complete with honest language, interesting characters, and a heartfelt, gritty edge, this quirky yet down-to-earth collaboration by two master YA storytellers will keep readers turning pages.—Diane P. Tuccillo, Poudre River Public Library District, Fort Collins, CO [Page 158]. Copyright 2008 Reed Business Information.

When two teens, one gay and one straight, meet accidentally and discover that they share the same name, their lives become intertwined as one begins dating the other's best friend, who produces a play revealing his relationship with them both.

One cold night, in a most unlikely corner of Chicago, Will Grayson crosses paths with . . . Will Grayson. Two teens with the same name, running in two very different circles, suddenly find their lives going in new and unexpected directions, and culminating in epic turns-of-heart and the most fabulous musical ever to grace the high school stage. Told in alternating voices from two YA superstars, this collaborative novel features a double helping of the heart and humor that have won them both legions of fans.