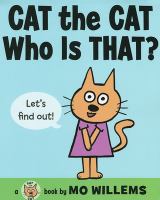 Cat the cat who is that?

An exuberant cat introduces readers to her friends.

Along with Let's Say Hi to Friends Who Fly (2010), this upbeat title introduces young children to a new cast of animal pals. In large, bold type well-suited for brand-new readers, a narrator asks the title's question as winsome Cat the Cat, in a sporty purple dress, says hello to her friends, whose greetings, printed in speech balloons, give a little glimpse into each new character's personality. Mouse the Mouse is straightforward ("Hello there!"), Duck the Duck is a bit formal ("A pleasure, as always!"), and Fish the Fish is surfer-cool ("Hey, dude!"). Then Cat the Cat runs into a many-armed alien, who is busily building a tower of blocks, and the text's easy, back-and-forth rhythm screeches to a halt: "Cat the Cat, who is THAT?" asks the narrator. "I have no idea," is Cat's wary answer, until she recognizes the adorable stranger as "a NEW friend!" Once again, Willems avoids heavy messages and walks right into kids' daily lives with this exuberant, clean-lined, animation-ready title that's sure to widen his already vast fan base.

In Cat the Cat's friendly world, names are an uncomplicated affair, most of the time. This early reader pictures Cat, an irrepressible kitty in a purple dress, skipping and cartwheeling to greet pals like Mouse the Mouse and Fish the Fish. All is well until Cat meets a chartreuse creature with eyestalks, a blue tongue, four arms, and three legs. She skids to a halt and her tail electrifies. The individual, unrecognizable but clearly amiable, stops stacking blocks to say, "Blarggie! Blarggie!" This time Cat's initial response to the repeated question, "Cat the Cat, who is that?" is "I have no idea," but Cat finally decides this might be "a new friend!" and responds with a bouncy "Blarggie!" of her own. Willems provides just enough humor and surprise to entertain youngest audiences and subtly suggests some future reading: Duck the Duck cradles a Pigeon doll, and in a second book being released simultaneously—Let's Say Hi to Friends Who Fly!—another character rides a Pigeon playground toy. Cat could become another favorite; her personality sparkles in expansive gestures and gleeful interactions. Up to age 5. (Feb.) [Page 45]. Copyright 2010 Reed Business Information.

PreS-K—Using a repetitive vocabulary with few new words added in, Willems offers successful reading experiences for the earliest readers, complete with fun-loving, friendly characters and surprise story lines. In the first book, Cat the Cat meets her friends as she answers the oft-repeated question, "Cat the Cat, who is that?" with "It's Mouse the Mouse!" Questions and answers are in large, bold type while white word balloons with a clear, dark font are used effectively to further the simple conversation. Cat the Cat continues on as she meets Duck the Duck, Fish the Fish, and a strange-looking alien who, after scaring her at first, becomes her new friend. In Let's Say Hi, Cat the Cat asks Bee the Bee, Bird the Bird, and Bat the Bat if they can fly. They all answer "watch me" as they fly away. The story takes a surprise turn as the friends ask Rhino the Rhino if he can fly, and he takes off in his airplane, taking them with him. The animals are drawn with expressions ranging from wide-eyed innocence to surprise as they learn about the world around them. Drawn on a mostly uncluttered sky-blue background with thick black lines, the characters are illustrated in a brighter and wider range of colors than in Willems's previous works. Fans of "Elephant and Piggie" (Hyperion) may think themselves to be a bit advanced for this newest cast of characters, but they will want to join in on these latest adventures where even Pigeon makes subtle appearances.—Kristine M. Casper, Huntington Public Library, NY [Page 97]. Copyright 2008 Reed Business Information.

An exuberant cat introduces readers to her friends.

Cat the Cat sure likes her friends. You will too! Join this spunky feline as she introduces the very youngest readers to her world, where a surprise is waiting in every book!