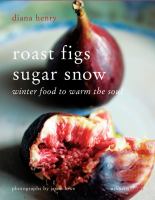 Henry is the food columnist for the Sunday Telegraph magazine and was twice awarded the Cookery Journalist of the Year by Britain's Guild of Food Writers. Her fourth cookbook (after Pure Simple Cooking) is an appealing collection of winter dishes from the Northern Hemisphere (including northern Italy, France, Russia, Switzerland, and Vermont), certain to make cooks yearn for a long winter. Instead of the usual New England clam chowder, Henry presents Quebecois Mussel Chowder with Cod and Cider. Sure to appeal to cooks in chilly climes; highly recommended. [Page 99]. Copyright 2008 Reed Business Information.

British author Henry (The Gastropub Cookbook) presents a soul-stirring collection of winter comfort food as warm and welcoming as a cup of hot cocoa on a snowy day. Henry warms readers with mulled wine, rich Onion and Cider Soup and a Camembert-topped slice of toasted bread, a pumpkin tart with spinach and gorgonzola and Stuffed Quail with Marmalade and Whiskey. Henry's Eurocentric lineup includes regional favorites like Romanian Bean, Smoked Bacon and Sour Cream Soup, Sorbronade (essentially a simpler cassoulet) and a Tagliatelle with roast pumpkin, sage, ricotta and smoked cheese from northern Italy. She also offers dishes from this side of the pond, such as a Quebecois Mussel Chowder with Cod and Cider as well as classic baked beans. A tendency to ramble, waxing poetic about the wonders of pears or cranberries, but is all a part of Henry's charm. Peppered with snow-filled snapshots, the work as a whole makes a kind of greatest wintertime hits. (Nov.) Copyright 2009 Reed Business Information.

Presents a collection of recipes for winter favorites from the northern hemisphere--from Russia and Scandinavia to Quebec and New England--including dishes featuring cheese, winter vegetables, smoked foods, and maple syrup.

An irresistible collection of enticing and memorable cold-weather food - updated with 6 completely new recipes.Diana Henry spent 5 years travelling and eating in search of the tastiest dishes from the snowiest climes, resulting in an irresistible collection of dishes from North America and Northern Europe. This unique collection of recipes celebrates some of the world's most overlooked cuisines by using produce that can be found on our own doorsteps. There are potato and cheese dishes from Italy's skiing slopes, pastries from the coffee houses of Vienna and Budapest, and little appetizers that have been eaten at Russian celebrations since the days of the Tsar. These recipes will bring warmth to your heart as well as your home.