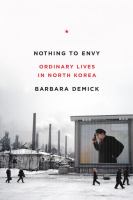 Nothing to envy Ordinary lives in North Korea

Follows the lives of six North Koreans over fifteen years, a chaotic period that saw the rise to power of Kim Jong Il and the devastation of a famine that killed one-fifth of the population, illustrating what it means to live under the most repressive totalitarian regime today.

*Starred Review* In spite of the strict restrictions on foreign press, award-winning journalist Demick caught telling glimpses of just how surreal and mournful life is in North Korea. Her chilling impressions of a dreary, muffled, and depleted land are juxtaposed with a uniquely to-the-point history of how North Korea became an industrialized Communist nation supported by the Soviet Union and China and ruled by Kim Il Sung, then collapsed catastrophically into poverty, darkness, and starvation under the dictator's son, Kim Jong Il. Demick's bracing chronicle of the horrific consequences of decades of brutality provide the context for the wrenching life stories of North Korean defectors who confided in Demick. Mi-ran explains that even though her "tainted blood" (her father was a South Korean POW) kept her apart from the man she loved, she managed to become a teacher, only to watch her starving students waste away. Dr. Kim Ki-eum could do nothing to help her dying patients. Mrs. Song, a model citizen, was finally forced to face cruel facts. Strongly written and gracefully structured, Demick's potent blend of personal narratives and piercing journalism vividly and evocatively portrays courageous individuals and a tyrannized state within a saga of unfathomable suffering punctuated by faint glimmers of hope. Copyright 2009 Booklist Reviews.

For most Americans, North Korea, one of the last Communist dictatorships, is a totalitarian menace but socially a great blank space. Demick, a Los Angeles Times reporter based first in Seoul and now in Beijing, fills this void with well-rounded life stories based on seven years of interviews with individuals who escaped to South Korea or China. Mi-ran, for instance, as the daughter of a political outcast, could meet with her young man only after dark, when they would take advantage of the complete absence of electric lights to walk for miles and miles unobserved—without, however, going even so far as to hold hands. She could not let him know of her plans to leave for fear that the authorities would hold him responsible or that he would need to inform on her to protect his family. This and other life stories form a welcome portrait of "ordinary" lives in an extraordinary society. VERDICT Recommended for readers interested in North Korea who want to supplement their political studies or simply enjoy the personal approach.—Charles W. Hayford, Northwestern Univ., Evanston, IL [Page 126]. Copyright 2010 Reed Business Information.

A fascinating and deeply personal look at the lives of six defectors from the repressive totalitarian regime of the Republic of North Korea, in which Demick, an L.A. Times staffer and former Seoul bureau chief, draws out details of daily life that would not otherwise be known to Western eyes because of the near-complete media censorship north of the arbitrary border drawn after Japan's surrender ending WWII. As she reveals, "ordinary" life in North Korea by the 1990s became a parade of horrors, where famine killed millions, manufacturing and trade virtually ceased, salaries went unpaid, medical care failed, and people became accustomed to stepping over dead bodies lying in the streets. Her terrifying depiction of North Korea from the night sky, where the entire area is blacked out from failure of the electrical grid, contrasts vividly with the propaganda on the ground below urging the country's worker-citizens to believe that they are the envy of the world. Thorough interviews recall the tremendous difficulty of daily life under the regime, as these six characters reveal the emotional and cultural turmoil that finally caused each to make the dangerous choice to leave. As Demick weaves their stories together with the hidden history of the country's descent into chaos, she skillfully re-creates these captivating and moving personal journeys. (Jan.) [Page 51]. Copyright 2009 Reed Business Information.

An analysis of North Korea throughout the past 15 years as reflected by the lives of six everyday citizens traces their struggles for survival under totalitarian governance, including coverage of the death of Kim Il Sung, the rise of Kim Jong Il and the famine that has killed countless people.

Follows the lives of six North Koreans over fifteen years, a chaotic period that saw the rise to power of Kim Jong Il and the devastation of a famine that killed one-fifth of the population, illustrating what it means to live under the most repressive totalitarian regime today.

An eye-opening account of life inside North Korea—a closed world of increasing global importance—hailed as a “tour de force of meticulous reporting” (The New York Review of Books)  NATIONAL BOOK AWARD FINALIST • NATIONAL BOOK CRITICS CIRCLE AWARD FINALIST  In this landmark addition to the literature of totalitarianism, award-winning journalist Barbara Demick follows the lives of six North Korean citizens over fifteen years—a chaotic period that saw the death of Kim Il-sung, the rise to power of his son Kim Jong-il (the father of Kim Jong-un), and a devastating famine that killed one-fifth of the population.   Demick brings to life what it means to be living under the most repressive regime today—an Orwellian world that is by choice not connected to the Internet, where displays of affection are punished, informants are rewarded, and an offhand remark can send a person to the gulag for life. She takes us deep inside the country, beyond the reach of government censors, and through meticulous and sensitive reporting we see her subjects fall in love, raise families, nurture ambitions, and struggle for survival. One by one, we witness their profound, life-altering disillusionment with the government and their realization that, rather than providing them with lives of abundance, their country has betrayed them.Praise for Nothing to Envy“Provocative . . . offers extensive evidence of the author’s deep knowledge of this country while keeping its sights firmly on individual stories and human details.”—The New York Times “Deeply moving . . . The personal stories are related with novelistic detail.”—The Wall Street Journal “A tour de force of meticulous reporting.”—The New York Review of Books “Excellent . . . humanizes a downtrodden, long-suffering people whose individual lives, hopes and dreams are so little known abroad.”—San Francisco Chronicle “The narrow boundaries of our knowledge have expanded radically with the publication of Nothing to Envy. . . . Elegantly structured and written, [it] is a groundbreaking work of literary nonfiction.”—John Delury, Slate “At times a page-turner, at others an intimate study in totalitarian psychology.”—The Philadelphia Inquirer