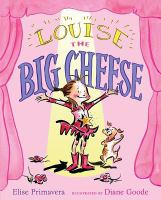 When she learns her class will be doing a play, little Louise Cheese has big dreams of being the star, but when her best friend is given the lead she learns that even the small roles count.

Louise Cheese likes the limelight, so when a school play is announced, she's sure she will win the role of Cinderella. To her shock and disappointment, it is her friend Fern who walks off with the leading part, while Louise is cast as a mouse. To add insult to injury, her costume used to belong to one of the three blind mice. Louise gets mad at Fern and no longer wants to participate, but of course, the show must go on, and it does, with a renewed friendship once Louise helps Fern with a dropped line. Primavera's breezy story (sometimes a little too breezy, as the middle gets a bit muddled) and Goode's distinctive artwork intermingle wonderfully. In both story and art, Louise makes a splash as a girl who knows what she wants (stardom!) and sees the future (Broadway!) but can also deal with reality. Goode is at her best here, using a pretty pink palette touched with greens to set the stage for an outspoken heroine. Cue applause. Copyright 2009 Booklist Reviews.

A bubblegum pink jacket with glittery type will catch the eye of aspiring leading ladies and Fancy Nancy fans. Inside, they'll easily identify with the drama-loving protagonist of Primavera's (Auntie Claus) buoyant tale. Small in stature, Louise is sure that landing the role of Cinderella in her school play is her ticket to Broadway (her motto: "Dream big!"). Alas, her best friend Fern gets that part, while Louise is cast as a mouse, resulting in a spat between the girls. Caldecott Honor artist Goode's (When I Was Young in the Mountains) playful watercolors with whimsical and expressive black outlines capture Louise's mercurial personality, as when the would-be diva holds up the broken tail of her itchy, secondhand mouse costume in disgust, while Fern, in a "frilly pink big-cheese Cinderella ball gown," delightedly rehearses her crowning line. Their friendship is restored in the end, as Louise rescues her pal when Fern freezes and forgets her lines. Hand-lettered dialogue balloons and humor-filled renderings of Louise's show-biz dreams, bursting with pink and magenta, drive home the heroine's larger-than-life outlook. Ages 4–8. (Sept.) [Page 47]. Copyright 2009 Reed Business Information.

K-Gr 2—Louise Cheese dreams of being a big star. She wishes her parents were less ordinary and envies her older sister because Penelope has a big room and lots of shades of lipstick. When her teacher announces that the class is going to put on Cinderella, Louise is convinced that she will get the lead and this will be her ticket to Broadway. Then her friend Fern gets the role, and Louise is cast as one of the mice, thus severing their friendship. When Fern forgets her last line, Louise cues her and all ends happily. The watercolor and ink illustrations are very pink as Louise fantasizes in pink. Dialogue is in word bubbles, and there's a fair amount of text. The cover is pink, with letters that sparkle. This Fancy Nancy look-alike is a nice-enough story but it's been done many times before.—Ieva Bates, Ann Arbor District Library, MI [Page 131]. Copyright 2008 Reed Business Information.

When Mrs. Little chooses her friend Fern for the big part of Cinderella instead of her, Louise must instead play the part of a lowly mouse and wonders when she will get her big chance at diva-hood.

When she learns her class will be doing a play, little Louise Cheese has big dreams of being the star, but when her best friend is given the lead she learns that even the small roles count.

Let's face it. Every girl has a little big cheese in her. Louise Cheese is no different. Night and day, Louise dreams of the limelight, lots of fuss, the red carpet, and more than anything to be the one and only "Big Cheese." Finally, Louise gets her chance when her teacher, Mrs. Little, announces a casting call for the role of Cinderella in the school play. It's Louise's chance to be a star...or is it? With humor and heart and just a little attitude, Elise Primavera and Diane Goode tell a story that will inspire the inner big cheese in all who read it.