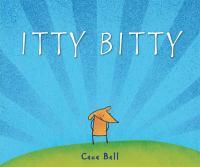 Itty Bitty may be a very, very tiny dog, but he finds a way to make a home in the big, big world.

*Starred Review* A tiny dog named Itty Bitty finds an enormous bone and, after chewing door and window holes in it, hollows it out to make a house. The empty bone doesn't feel quite homelike, though, so Itty Bitty drives into the city to visit a department store. Beyond the gigantic chairs and rugs, he finds the TEENY-WEENY Department, where he chooses "an itty-bitty table and an itty-bitty rug . . . / an itty-bitty sofa and an itty-bitty lamp."  There's even an itty-bitty book. He carts his purchases away and turns his empty bone into a cozy home. In the colorful ink-and-acrylic illustrations, Bell uses line, color, texture, and white space extremely effectively to create this diminutive character and his world. Itty Bitty, drawn with a highly simplified body and stick legs, is dwarfed by the daisies and grass surrounding his home and sometimes appears quite vulnerable (and who wouldn't be, driving a three-wheeled, walnut-shell vehicle among full-size cars?). But more often, this small, stalwart character looks as capable and confident as every young child would like to feel. With its irresistible repetitions of "itty-bitty" and occasional comments in speech-balloons, the simple text reads aloud well. Unpretentious, endearing, and enormously satisfying, this little book is one that children will ask for again and again. Copyright 2009 Booklist Reviews.

Where does a tiny dog find just the right decor for his hollowed-out-bone house? Why, the "teeny-weeny department" at a huge store downtown, of course! Such is the premise of this sweet and silly picture book that introduces a sunny pup of small size but big personality. Itty Bitty, a tan-colored dog not even as tall as a blade of grass, just wants to feel comfy in his new digs. A spread that shows him speeding down the road on his shopping trip, riding on a tricycle fashioned out of a walnut shell, is laugh-out-loud funny. Bell's (Bee-Wigged) crisp acrylic and ink artwork features blocks of color and simple stylized shapes on grainy, speckled backgrounds. Itty Bitty is reminiscent of a character Ed Emberley might create in one of his drawing books—a square body, triangle head and stick legs. But his pinpoint eyes, gentle smile and frequent exclamations of delight ("Satisfactory!") give him lots of warmth. Ages 3–7. (June) [Page 46]. Copyright 2009 Reed Business Information.

PreS-Gr 1—Good things come in small packages, including this book. When Itty Bitty, "a very, very tiny dog," finds a "very, very enormous bone," he turns it into his new home. The house feels empty, however, so he goes out to buy some furniture, driving to the store in his walnut-shell vehicle. Everything Itty Bitty sees there is huge, and he worries that he won't find anything suitable until he notices a sign pointing to the "Teeny-Weeny Department." He returns home with his tiny car loaded to the brim with everything he needs to make his new dwelling cozy. Children will enjoy this simple story about finding a place for oneself. The colorful illustrations, done in acrylic with ink, add cheer to the delightful story. The text is simple enough for beginning readers, and the book also makes a great read-aloud with small groups.—Kate Neff, Alachua County Library, Gainesville, FL [Page 115]. Copyright 2008 Reed Business Information.

Itty Bitty, a very tiny dog, does all that he can to make a home for himself that is just the right size.

Finding an enormous bone, tiny Itty Bitty the dog works hard to make it a special place to call his own, but after cutting out windows and a door, he finds it just too empty and so now must locate the appropriately sized decorations to fit inside his special home.

For a teeny-tiny dog seeking a home in a daunting world, big hopes — and a bit of ingenuity — go a long way.Itty Bitty is a very, very tiny dog. But when he finds an enormous bone, he goes straight to work, gnawing out doors and windows and hollowing out the entire inside. When his work is done, however, his cavernous house still feels incomplete. Where can he find some itty-bitty things that will make this bone a home? Everyone from dollhouse lovers to grown-ups setting up a home of their own will fall for this comical tale of an optimistic canine who is small in stature but huge in charm.