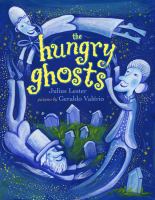 "The title may sound pretty scary, but rest assured there's no soul-snatching or corpse-eating involved. Rather, it is the story of young Malcolm, a boy who lives alongside a cemetery and begins suspecting that ghosts are visiting him at night. With help from his magical ringring bird, he wakes up during a full moon and investigates the graveyard to find three old-timey ghosts—Jessica, Byron, and Lamont—swooping after him and screeching "OOOOOOO!" and "EEEEEEEE!" As it turns out, those horrid noises are simply their stomachs, because what the heck does a hungry ghost eat? After cleaning his bedroom of old apples, bananas, and oranges, Malcolm stumbles upon the answer: ghost-filled fruit! Ignoring for the moment the uneasy concept that the plants we eat have souls, it's an inventive idea peppered with folksy references to such characters as "Sister Moon" and "Brother Sun." The main attraction, however, is Valério's luminous art, which practically leaps from the glossy pages with deep-blue nights infused with otherworldly green glows. An ideal choice for Halloween storytimes." Copyright 2009 Booklist Reviews.

Lester's (John Henry) yarn straddles the line between folktale and modern ghost story. It's set in the present—the hero, Malcolm David, has a computer in his bedroom—but Valrio's (All Aboard for Dreamland!) nave artwork makes joyful use of indigenous art while Lester's sentences resonate with the rhythms of oral storytelling. Malcolm David, who has soulful brown eyes and a potato-shaped nose, discovers bewigged and top-hatted ghosts Jessica, Byron and Lamont after hearing them howl in the cemetery "where the tombstones gleamed dully like broken dreams." They're not scary—they're just hungry, and it's up to Malcolm David to feed them (the ghosts of people eat the ghosts of food, readers discover). The story combines realism (his mother tells him to clean his room) with fantasy (he has a time-keeping ringring bird). Lester's prose makes even falling down a fresh experience ("With one foot wanting to go forward and the other wanting to go backward, and him just wanting to go, he tripped and fell"), and Valrio's turquoise and cobalt blue spreads deepen the atmosphere of cheery haunting. Ages 3–5. (Aug.) [Page 53]. Copyright 2009 Reed Business Information.

K-Gr 3—Lester's originality shines brightly in this whimsical tale of a curious boy who senses ghosts outside his bedroom window and decides to pursue them. This story includes delectable imagery as seen in the opening pages: "…Sister Moon unfolded her arms to let her light pour down over the countryside like fresh milk on cereal." Valrio's folk-inspired paintings are created in vivid blues, purples, and greens, and are representative of the night in which Malcolm spends most of his time searching for his new friends. The ghostly creatures turn out to be nonmenacing and only needing to find food. The child saves the day by finding the remnant ghosts of fruits and vegetables to feed his acquaintances. The story is clever and charming and will give families another choice for Halloween, or ease little ones' fears of ghosts. The only disappointment is the lack of development of certain aspects of the story. The tale is rich and complex, but the addition of unexplained characters such as Malcolm's "ringring bird" might leave youngsters slightly confused or puzzled. A worthwhile purchase nonetheless.—Adrienne Wilson, Edith Wheeler Memorial Library, Monroe, CT [Page 79]. Copyright 2008 Reed Business Information.

When he hears the hollering and growling coming from the cemetary nearby his house and sees ghosts flying about, David decides to look into the matter and gets quite a surprise when he learns what all the ruckus is about. 25,000 first printing.

There are ghosts in the cemetery near Malcolm David?s house, and they?re filling the air with their spooky OOOOOs and EEEEEs and ARRRRs. When Malcolm David dares to go looking for them late one night, he is surprised to discover that the eerie howling is actually coming from the ghosts? empty stomachs. They?re not trying to scare anybody? they?re just hungry, and they don?t know what it is that ghosts are supposed to eat!A satisfying read-aloud for Halloween or anytime, this book mixes playfulness and lyricism as only Newbery Honor?winning author Julius Lester could do it. His dynamic text is well matched by Geraldo Valério?s glowing, happy artwork.