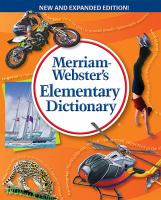 Gr 3–6—Bridging the publisher's Primary Dictionary and its Intermediate or School offerings, this update contains more than 36,000 entries and 800 color illustrations, photographs, and diagrams, many of them new. Most entries include sample sentences; 1300 are quotations from popular children's books (listed in an appendix). The work of classic authors such as Louisa May Alcott and E. B. White, along with contemporary writers such as Judy Blume and Jack Gantos, is excerpted to "…help build language skills and encourage a love of reading." Many of the quotes are uninspiring and not particularly representative of the books: for example, a line from Harry Potter and the Chamber of Secrets (Scholastic, 1999) reads: "The sides of the car were scratched and smeared with mud." On each page, guide words in color appear at the top, and a vertical alphabet list (with the current letter framed) scrolls down the margin. Most pages have one or two images or highlighted paragraphs discussing word histories, Greek and Latin roots, or synonyms. "Headscratchers" contain inane curiosities such as, "Thousand is the first number whose name is spelled using an a. That means that you can count from zero to nine-hundred, ninety-nine without ever using an a!" Front matter includes a labeled page key and an explanatory "Using Your Dictionary" note. Signs and symbols (including mathematical and business-writing conventions), a geographical name dictionary, and full-color political world and U.S. maps are appended.—Barbara Auerbach, New York City Public Schools [Page 74]. Copyright 2008 Reed Business Information.

Gr 3–5—This attractive, comprehensive edition features 200 more words than its 2009 predecessor, which is the only significant update. Pronunciation symbols and parts of speech notations accompany each definition, and synonyms and cross-references are included where appropriate. A paragraph in each entry offers the history of the word. For instance, the entry for "fanatic" explains that the word is from the Latin "fanaticus" and meant "of a temple." It was not until the 1500s that the word took on its current meaning of "very enthusiastic supporter or admirer." Like the 2009 edition, this one has more than 1,300 quotes integrated into the entries. The quotes, in blue font, come from more than 100 classic and contemporary children's books and help contextualize words for students. For instance, "marvel" is accompanied by a quote from Gail Carson Levine's Ella Enchanted: "I had never seen such beautiful illustrations…I turned the pages, marveling." Occasionally, an entry is featured in a brightly colored "word history" box. At least 900 main entries are accompanied by a full-color illustration. The appendixes include a punctuation guide for writers, a map of the United States and one of the world, and a glossary of geographical names from around the world. A worthy addition.—Jennifer Prince, Buncombe County Public Libraries, NC [Page 66]. (c) Copyright 2013. Library Journals LLC, a wholly owned subsidiary of Media Source, Inc. No redistribution permitted.

A dictionary for students ages eight to eleven with meanings and uses given for more than 36,000 words also includes explanatory introductory material, new illustrations, and special sections on U.S. Presidents, geographical terms, word roots, and a list of literary works used in the text.