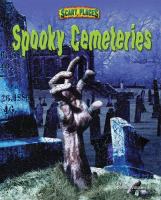 Discusses the supposed hauntings of various cemeteries, including the Gettysburg National Military Park and Tutankhamun's tomb in Egypt.

Readers will get a lesson in history in this series of titles that looks at what happened in various historical places and how these happenings are tied to tales of ghosts, poltergeists, and other unexplainable phenomena.

Do the dead tell tales? Readers will find out in this scary trip through 11 of the world's spookiest graveyards. Among the stops: Chestnut Hill Cemetery in Rhode Island. That's where a little girl named Mercy Brown is buried. In the late 1800s, her family was hit by tuberculosis. First, her mother and sister died. Then Mercy herself became sick and died. In desperation to save his tubercular son, her father—who had become convinced that Mercy was a vampire rising from the grave each night to suck the life blood from her sibling—dug up her body, cut out her heart and burned it, and served the ashes to her brother. Such compelling historical nonfiction will keep readers eagerly turning the pages in this macabre exploration of the world of the dead.