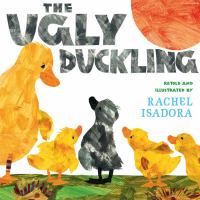 In this retelling of the Ugly Duckling, set on the African continent, the duckling spends an unhappy year ostracized by the other animals before he grows into a beautiful swan.

Continuing Isadora's series of European fairy tales placed in African settings, this picture book retells Andersen's "The Ugly Duckling," simplifying the story for a younger audience. Scorned by "the animals on the farm" (depicted as African wildlife), the ugly duckling runs away and almost freezes when snow and ice cover the land. In this version of the surprise ending, the Ugly Duckling turns into a black swan (a species native to Australia). The cut-paper-collage illustrations are colorful and dynamic. Though there's plenty about the adaptation for adults to discuss and criticize, many young children will find this vividly appealing. Copyright 2009 Booklist Reviews.

Isadora's latest interpretation of a fairy tale remains mostly loyal to the story line, but its sensual, mosaiclike collages create depth and texture, evoking the essence of an African savanna. The "large and clumsy" duckling, black and gray to the other ducklings' bright yellow, is ostracized by the other animals on the farm. But when a "kind farmer" takes him in, he lives with the farmer's family over the winter. In the spring, he emerges as a lovely swan with inky, blue plumage. A stirring adaptation. Ages 5–8. (May) [Page 55]. Copyright 2009 Reed Business Information.

Gr 1–4—Once again, Isadora sets her adaptation in Africa. While faithful to the basic elements of Andersen's story, she softens the bitterness of the duckling's stay with the old woman and her animals, and instead of the harsh treatment originally meted out by the farmer's wife and children, states that "the duckling was showered with kindness." Also less dramatic is the animal's surprise discovery of his own beauty when he is approached by a group of swans. What shines in this telling are the illustrations, all collage spreads executed in oil on palette paper and printed paper. While it may seem unusual for a baboon, monkey, giraffe, and other native African creatures to appear among the farm animals that taunt the duckling, Isadora's brilliant colors and broad brushstrokes beautifully capture the unnamed African setting, where a huge orange sun beats down on lush vegetation and, in a change of season, blue-white icicles hang from bare branches over a frozen lake. A particularly striking spread depicts the forlorn duckling standing apart from a line of African animals, all in silhouette at the water hole, watching a flock of birds take to the skies. Baskets, clothing, headpieces, and jewelry evoke African culture. It may be interesting for children to compare this unusual setting with Jerry Pinkney's (HarperCollins, 1999), a more traditional and beautifully illustrated version.—Marianne Saccardi, formerly at Norwalk Community College, CT [Page 78]. Copyright 2008 Reed Business Information.

In a retelling of "The Ugly Duckling" set on the African continent, the duckling spends an unhappy year ostracized by the other animals before he grows into a beautiful swan.

Set in Africa, this beautifully illustrated picture book offers a twist on the classic tale about an ugly duckling who struggles to find acceptance amongst all the African animals and, after many heartbreaking encounters, finally grows up to be a true beauty--and the envy of them all

Set in the wilds of Africa, Caldecott Honor winner Rachel Isadora's stunning interpretation of the beloved Hans Christian Andersen fairy tale portrays African animals and landscapes with beautiful detail. As the ugly duckling searches for a place where he can fit in, Isadora's vibrant collages capture the beauty in everything from glistening feathers to shimmering sunsets.