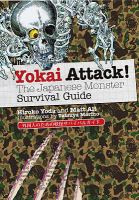 Yokai are Japan's traditional creepy-crawlies. Almost always encountered in the dark of night, they were once feared throughout the land. But they're more than just myth, more provocative than pop culture--references to yokai abound in Japanese idioms, and nearly every Japanese person has atleast a passing knowledge of the most famous of these captivating creatures from times of old. Now, after collecting data and descriptions from a variety of sources, including first-hand accounts and microfilms of 18th-century publications stored in the National Diet Library in Tokyo, authors HirokoYoda and Matt Alt have produced the first English-language guide to Japans yokai monsters. Original illustrations, created by the talented Tatsuya Morino, detail the potential visible appearance of each yokai. And alongside each and every one are data points allowing you to take in each yokai'scharacteristics at a glance. Forget Godzilla. Forget the giant beasties karate-chopped into oblivion by endless incarnations of Ultraman, Kamen Rider, and the Power Rangers. Forget the Pocket Monsters. Forget Sadako from The Ring and that creepy all-white kid from The Grudge. Forget everything you know about Japanesetales of terror. Their roots may extend back to days of yore, but Yokai Attack! will convince any reader that Japan's bewitching tradition of yokai monsters is far from being history.