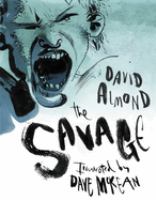 A boy tells about a story he wrote when dealing with his father's death about a savage kid living in a ruined chapel in the woods-- and the tale about the savage kid coming to life in the real world.

A story-within-the-story that explores the means of handling grief forms the thrust of this compact book. After Blue Baker's father dies, his school counselor tries to get him to write down and explore his feelings. I did it for a while, but it just seemed stupid. Instead, he secretly starts writing and drawing a story about a feral boy living alone in the woods. Blue's story which slashes into the narrative, the moody and ragged artwork a mirror for Blue's inner turmoil is interspersed with his struggle to cope with the loss of his father, run-ins with a bully, and difficulty reaching out to his mother and younger sister. The savage in his story is a violent, languageless creature who chases down, kills, and eats people who get too close. The line separating Blue and his imaginary savage becomes increasingly blurred, each bleeding into the other's world, leading to an inevitable, though earned, catharsis. Avoiding sentiment, this illuminating book captures the staggering power of raw emotions on young minds, and demonstrates the ways expression can help transform and temper them. Copyright 2008 Booklist Reviews.

Gr 5–9—Blue is scrawny and nice. He is harassed by a big, dumb, smoking boy named Hopper. Blue's father died suddenly when he was younger. To cope, he wrote a comic book about a feral boy who gets to express his anger and loneliness through violent revenge, something Blue can't or won't do. Then parts of the story merge with real life. The characters' conversations and relationships are believable. The story is so thin, though, that there's little chance to care about the players. McKean's tonal watercolor panels, which illustrate roughly half of the pages, are full of palpable rage—gorgeous, frightening, and highly effective images. They set an ornery, mysterious mood that Almond's lackluster story never quite matches. Though the prose is clear and simple, the pace, in an attempt to build mystery, is too methodical for so obvious an allegory. The phonetic spelling in Blue's comic indicates a child much younger than the novel's somewhat confusing chronology indicates.—Johanna Lewis, New York Public Library [Page 118]. Copyright 2008 Reed Business Information.

After his dad's death, Blue Baker finds comfort in writing about a savage living alone in the woods near his home, but when the savage pays a night-time visit to the local bully, boundaries become blurred and Blue begins to wonder where he ends and the savage begins.

A boy tells about a story he wrote when dealing with his father's death about a savage kid living in a ruined chapel in the woods--and the tale about the savage kid coming to life in the real world.

Mysterious and utterly mesmerizing, this graphic-novel-within-a-novel pairs the extraordinary prose of David Almond with the visual genius of Dave McKean.Blue Baker is writing a story &; not all that stuff about wizards and fairies and happily ever after &; a real story, about blood and guts and adventures, because that's what life's really like. At least it is for Blue, since his dad died and Hopper, the town bully, started knocking him and the other kids around. But Blue's story has a life of its own &; weird and wild and magic and dark &; and when the savage pays a nighttime visit to Hopper, Blue starts to wonder where he ends and his creation begins.