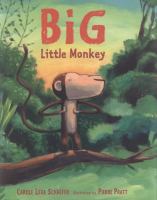 When Little Monkey decides to venture out into the jungle alone, beyond the gaze of his watchful Mama, he discovers that other animals are not as friendly and warm as his own family and that independence is not altogether a good thing.

PreS-Gr 2— Little Monkey's family is asleep, so the "big little monkey" sets off to explore on his own. He tries to play with the creatures he meets, imitating something they do, but Steady Sloth is too quiet, Proud Parrot too squawky, and Sly Boa too tricky, so he heads back home. He decides that sometimes he is still his "Dear Mama['s]…Little Monkey." Schaefer's text has the style and cadences of a folktale with the effective refrain "bim-ba-lah, bim-ba-lah" appearing as the protagonist swings through the trees. Although at times she injects words such as "hey" into the text, at its best, the language shines as Little Monkey tells the boa: "…I am playing Curl My Tail Around in Tricky Ways. Like you." Pratt's stylized animals, done in sweeping, brightly colored acrylics, are reminiscent of Manya Stojic's work, and the mostly full-bleed illustrations with their color-saturated backgrounds are eye-catching and will carry well in storytimes. Little Monkey is a typical toddler, testing his limits and exploring his surroundings, but ultimately wanting the safety and reassurance of his mother's arms. With a simple text, well-placed page turns, and an accessible story line, Schaefer and Pratt's collaboration is a terrific addition to most collections.—Amy Lilien-Harper, The Ferguson Library, Stamford, CT [Page 123]. Copyright 2008 Reed Business Information.

When Little Monkey decides to venture out into the jungle alone, beyond the gaze of his watchful Mama, he discovers that other animals are not as friendly and warm as his own family and that independence is not altogether a good thing.

"Chee-chatta-chee!" A sweet, funny tale of a small monkey's first swings toward independence — and his new appreciation of the comforts of homeEarly one morning in the big mango tree, Little Monkey wakes up and finds his whole family still asleep. Is Little Monkey brave enough and big enough to go find someone else to play with? He thinks so! And bim-ba-lah, bim-ba-lah, he swings away, hand over hand, until he finds a sloth to hang upside down with (too quiet), a parrot to sing along with (too squawky), and even a hissing boa to join in a game of Curl My Tail Around in Tricky Ways (way too tricky!). Will Little Monkey find just the right playmates, in just the right place?