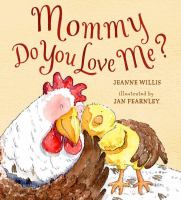 Mommy, do you love me?

Universal story about the love between a a parent and a child.

Little Chick tries out various activities with his mother to determine if the love she has expressed for him has any limits. Each activity—making a funny face, getting muddy, losing a race—elicits the same promise of undying, unconditional love. Little Chick goes a bit too far, though, when he chirps loudly and ignores Mother's requests for quiet. He's shocked when she shouts at him and is convinced she doesn't love him—until she explains that even though his actions sometimes make her angry, she'll love him anyway. Soft watercolor-and-ink illustrations, many of which fill the page, perfectly enhance the sweetness inherent in the text. Pair this with books like Sam McBratney's Guess How Much I Love You (1994) and Susan Milford's A Mother's Promise (2008). Copyright 2008 Booklist Reviews.

Through a series of tests—deliberate and not—a chick becomes almost totally convinced that his mother's affections are unshakable. Then, provoked by her son's almost manic cheeping, his mother momentarily loses it, and Little Chick is himself shaken. The mother hen repairs the breach with some unconditional reassurance ("Sometimes you make me mad, and sometimes you make me sad, but no matter what you say or do, I will always love you") and with that surefire parenting trick, the funny face. Working in warm, translucent watercolors and velvety black outlines, Fearnley (previously paired with Willis for Never Too Little to Love ) gives her characters an endearing depth of expression and personality. The hen's beady eyes beam with pride and bemusement at her spunky, downy offspring, and when the chick loses a race, his mother comforts him with a pat of her wing and a look that is fully empathetic even as it conveys "this too shall pass." These highly individuated scenes of barnyard domesticity considerably buoy an otherwise predictable tribute to the constancy of mother love, while the large-scale watercolors on outsize pages let readers appreciate every nuance. Ages 3-up. (Mar.) [Page 78]. Copyright 2008 Reed Business Information.

PreS— In this picture book with a tried-and-true theme, a chick repeatedly asks his mother whether she loves him. Her answer is reassuring even when he makes a funny face, jumps in a mud puddle, or loses a race. Then, when his happy chirping gets louder and louder and her pleas for quiet go ignored, she shouts at him, and Chick runs away. When she finds him, she tells him that although he sometimes makes her mad, and sometimes sad, her love remains steadfast. And when she makes a funny face, Chick returns the sentiments. Luminous watercolor-and-ink illustrations capture the tender, sometimes taut, interplay between mother and child. Their expressions are priceless, particularly Little Chick's exuberance when he knows he is loved and his sadness when his mother yells at him. Children will respond to this read-aloud.—Anne Parker, Milton Public Library, MA [Page 126]. Copyright 2008 Reed Business Information.

An adorable little chick wonders if his mommy stills loves him when he cheeps, chirps, and shouts very, very, loudly. 10,000 first printing.

Little Chick asks if his mommy loves him, no matter what he looks like, or how he behaves.

Little Chick learns that his mother still loves him no matter what he looks like or how he behaves.

No amount of mischief can shake a mommy’s assurance of affection in this humorous, heartening story sure to soften even the most trying days.Even when a little chick makes funny faces, splashes in the mud, and comes in last place, his mommy still loves him. But does she love him when he cheeps and chirps and shouts very, very loudly? Does she still love him even when he’s bad? With a reassuring text from Jeanne Willis and energetic illustrations by Jan Fearnley, this sweet story about the love between a parent and child is sure to comfort young readers.