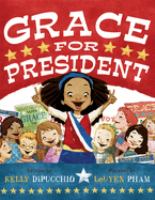 When Grace discovers that there has never been a female U.S. president, she decides to run for school president.

DiPucchio and Pham are game gals. Explaining the electoral system to adults isn't easy, but  they make it understandable to kids. When Mrs. Barrington shows her class pictures of the presidents, energetic African American Grace asks, "Where are the girls?" Responding to Grace's shock, Mrs. Barrington arranges for an election in which Grace runs against Tom, with each of the remaining students in the multiethnic class representing a state. It looks like popular Tom will win since the boys have the most electoral votes, so Tom just sits back while Grace advances campaign promises. When the votes are counted, Sam, representing Wyoming (where the first woman was elected to the House), throws the winning votes to Grace, because he "thought she was the best person for the job."  The attractive paint-and-collage art captures the excitement of the race in layouts as diverse as the kids. However, there's one big problem in the author's note, which explains why individuals should vote even if they are not electing directly: "It's those individual votes from regular people that add up to become the popular vote in each state." The concept of larger versus smaller states isn't really explained, leaving the idea that the winner of the popular vote will be president. As Al Gore knows, that's not true. Copyright 2008 Booklist Reviews.

DiPucchio (Mrs. McBloom, Clean Up Your Classroom! ) delivers a lively and well-timed lesson on the electoral system. Grace, dismayed to learn there has never been a female U.S. president, announces she'd like to hold that office someday. Calling it a "star-spangled idea," the teacher organizes an election, with each student representing a different state and casting its allotted number of electoral votes. Depicted with comical hyperbole in Pham's (Freckleface Strawberry ) characteristic style, Grace's superstar opponent is smart, popular, athletic Thomas. Shrewdly calculating that the boys hold more electoral votes than the girls, Thomas studies and plays soccer while Grace diligently delivers speeches, offers free cupcakes, holds rallies and even begins to fulfill her campaign promises (the text doesn't comment on the other obvious difference: Thomas is white and Grace is a child of color). Not surprisingly, a boy casts the winning ballot for Grace, proclaiming her "the best person for the job." High-spirited images include Grace posing as Lady Liberty, speaking from the top of a bunting-draped jungle gym and kissing a baby. (The don't-miss-it picture is at the beginning, of kids looking at a poster containing the presidents' portraits, all of them rendered to an almost photographic likeness by Pham). An endnote clarifies the workings of the Electoral College. Ages 5-9. (Feb. ) [Page 57]. Copyright 2008 Reed Business Information.

Gr 2-5–When eager Grace Campbell vies with super-student Thomas Cobb for class president, the children learn how the electoral college works. While Thomas does little during the campaign, Grace embarks on a school-wide tour winning over voters with her can-do attitude and kindness. Full-color, animated illustrations add polish and pep. (c) Copyright 2012. Library Journals LLC, a wholly owned subsidiary of Media Source, Inc. No redistribution permitted.

Gr 1–4— When her teacher displays a poster of all the American presidents, Grace asks with alarm, "Where are the girls?" Dismayed to learn that there have been no women, she announces that she will run for president someday. Mrs. Barrington proposes that she practice by running for president of the elementary school, and the race is on. Her formidable opponent is Thomas Cobb, spelling-bee champion, science-fair winner, and soccer-team captain. DiPucchio succeeds at the daunting task of explaining the Electoral College to young children as the other students are randomly assigned to represent states and their corresponding number of delegates. The illustrations of Grace capture a sense of boundless enthusiasm. Her loose dreadlocks bouncing, she seems to almost jump from the page as she throws herself into the campaign. Grace is African American, but race is never discussed as the delegates quickly begin dividing themselves along gender lines. Oddly enough for a book about equality, there are a few stereotypes present. Grace gives away cupcakes while Thomas studies his science. At the mock convention, the delegates line up to cast their votes. The boy representing Alaska looks like an Eskimo dressed in a hooded fur coat while the girl from Arizona wears a feathered headdress. The story shows how difficult an election campaign can be, as Grace tries to be everywhere and do everything possible to win support. Thought-provoking and timely, this book will be useful in discussing both the positive and negative aspects of United States election campaigns.—Lucinda Snyder Whitehurst, St. Christopher's School, Richmond, VA [Page 84]. Copyright 2008 Reed Business Information.

Grace campaigns for president of her grade, but when her competition seems to have the support of all the male voters, she must use all her campaigning skills to win them over by showing that she is the best person for the job.

Excited about the idea of becoming the country's first female president, Grace joins the school's presidential campaign to get her career on track, but when her competition seems to have the support of all the male voters, Grace must use all her campaigning skills to win them over by showing how she is truly the best person for the job.

A fresh, fun, and "thought-provoking" New York Times bestseller about the American electoral college and why every vote counts from bestselling and award-winning duo Kelly DiPucchio and LeUyen Pham. "Where are the girls?" When Grace's teacher reveals that the United States has never had a female president, Grace decides she wants to be the nation's first and immediately jumpstarts her political career by running in her school's mock election! The race is tougher than she expected: her popular opponent declares that he's the "best man for the job" and seems to have captured the votes of all of the class's boys. But Grace is more determined than ever. Even if she can't be the best man for the job, she can certainly try to be the best person! This timely story not only gives readers a fun introduction to the American electoral system but also teaches the value of hard work, courage, independent thought -- and offers an inspiring example of how to choose our leaders.

"Where are the girls?" When Grace's teacher reveals that the United States has never had a female president, Grace decides to be the first.  And she immediately starts off her political career as a candidate the school's mock election.  But soon, she realizes that she has entered a tough race.  Her popular opponent claims to be the "best man for the job"--and seems to have captured all the male votes--while Grace concentrates on being the best person. In this timely story, author Kelly DiPucchio not only gives readers a fun introduction to the American electoral system, but also teaches them the value of hard work, courage, and independent thought--and offers an inspiring example of how to choose our leaders.