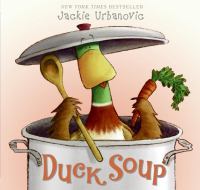 Maxwell Duck is trying to invent a soup that everyone will remember him for, but when he goes out to look for the missing ingredient and his friends show up, they think he has fallen into the soup.

In this raucous follow-up to Duck at the Door (2007), Max the duck is back in the kitchen, stirring up soup. Displeased with the flavor, he steps outside to gather more herbs. Enter animal pals Brody, Dakota, and Bebe, who spot a feather floating in the soup and jump to a horrifying conclusion: Max has fallen into the pot. "The strainer!" shouts Brody the dog, and the team, convinced they are rescuing their friend, pours Max's masterpiece into the sink— just as Max returns. The ending, in which the animals enjoy a take-out pizza, adds more laughs, although the abrupt introduction, on the final spread, of characters from Duck at the Door will puzzle children who aren't familiar with the first story. Urbanovic creates a slapstick delight with her wildly expressive characters and expertly conveyed physical comedy. Particularly uproarious are the animals' reactions as they discard the soup and imagine, momentarily, that the potatoes, carrots, and onions are, in fact, Max. Like its best-selling predecessor, this is sure to be a read-aloud hit. Copyright 2008 Booklist Reviews.

Jackie Urbanovic's plucky duck Max is back in Duck Soup. Mayhem ensues when Max's friends mistakenly believe he has fallen into the pot of soup he was cooking for dinner. (HarperCollins, $16.99 32p ages 4-7 ISBN 9780-06-121441-7; Feb.) Copyright 2008 Reed Business Information.

K-Gr 3— Children will anticipate that something goofy is coming by a glance at the cover art: a duck in a soup pot balancing a lid on his head. Urbanovic has created a funny story in which Max's friends mistakenly believe that he is in the soup pot. Their attempts to save him ruin his meticulously prepared soup ("'AHHHHH! It's his head!' said Bebe. 'Silly! It's only a potato!' Brody replied. 'EYEBALLS! His eyeballs!' said Bebe. 'Guys, it's only tiny onions!' said Brody"), but reinforce the value of friendship. The softly outlined watercolor illustrations feature a loose style that gives freshness and energy to each scene. Children will laugh out loud at the antics in this story, which blends so cohesively with the large pictures.—Lee Bock, Glenbrook Elementary School, Pulaski, WI [Page 98]. Copyright 2008 Reed Business Information.

Maxwell Duck is trying to invent a soup that everyone will remember him for, but when he goes out to look for the missing ingredient and his friends show up, they think he has fallen into the soup.

While getting close to perfecting his latest culinary masterpiece, Max the Duck thinks he sees something floating at the top of the pot and quickly loses all culinary composure as he tries to figure out what to do about the mistakenly identified item in his tasty creation.

Max the duck is cooking up an amazing soup. But what's this? A feather floating in the soup! And where's Max? Brody the dog, Dakota the cat, and Bebe the bird race about in their hilarious search for the missing Max. But remember, sometimes things just aren't as they appear.