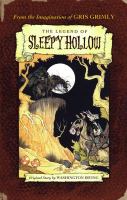 The legend of Sleepy Hollow

A superstitious schoolmaster, in love with a wealthy farmer's daughter, has a terrifying encounter with a headless horseman.

Washington Irving's classic American scare tale combines satire, horror, and farce, and in a memorable rendition well timed for Halloween, Grimly's darkly comic drawings draw forth all of these elements. As in his Edgar Allen Poe's Tales of Mystery and Madness (2004), the artwork unfolds in sepia-toned panels and vignettes that show Grimly's inspirations in early American comics. True to the source, the Horseman episode passes rather swiftly; most of the emphasis is on ridiculous Ichabod Crane, like "some scarecrow eloped from a cornfield," captured here in all of his gangly absurdity. Readers craving serious gooseflesh may find this less horrific than they expected, but the humor they discover, effectively interpreted by Grimly, is likely a worthwhile trade. Teachers wanting to share Irving's work aloud will welcome the gently abridged text, even if the small panels won't show well to a crowd; Grimly's arch, gothic sensibility, akin to that of Tim Burton and Edward Gorey, will even attract some high-school readers. Copyright 2007 Booklist Reviews.

Gr 5 Up— Grimly's interpretation of Irving's classic features quirky, creepy artwork that is strange in all the right ways. Calling to mind R. Crumb's crosshatched, wild-eyed, weirdly proportioned characters, Grimly's Ichabod Crane and the other townspeople are (predictably) grim caricatures. To cast the town in a perpetual twilight, the artist relies on a muted palette of grays, browns, tans, and oranges, which provides ample range and visual variety. The art and the text are not exactly symbiotic; Irving's prose, even with a few modifications, is simply too dense for modern readers. Youngsters may find themselves reading the text and examining the art separately, rather than absorbing both at the same time. More heavily graphic than an illustrated story, but still not quite a graphic novel, and equally at home in juvenile or young adult sections, this inventive but faithful adaptation deserves shelf space in most libraries.—Catherine Threadgill, Charleston County Public Library, SC [Page 116]. Copyright 2008 Reed Business Information.

A superstitious schoolmaster, in love with a wealthy farmer's daughter, has a terrifying encounter with a headless horseman.

Ichabod Crane, the Headless Horseman, and others come to life in an illustrated retelling of one the scariest ghost stories ever told! By the illustrator of Edgar Allan Poe's Tales of Mystery and Madness.

Are all the lights on?
Is there a parent in the house?
Are the windows shut and locked? Double-check!

They HAVE to be if you are going to read this book, which is undoubtedly the scariest rendition of one of the greatest ghost stories ever told: The Legend of Sleepy Hollow.

While you may have heard of Ichabod Crane, Katrina Van Tassel, and the Headless Horseman, you've never SEEN them quite like this -- through the macabre imagination of the inimitable Gris Grimly.

So, take a deep breath and take a long look. And you may want to bring a flashlight to bed with you tonight....