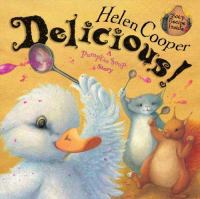 Unable to find a suitable pumpkin to use for soup, Cat and Squirrel attempt to make other versions for Duck, their fussy friend, but it's only when they find a way to make the dish orange that Duck agrees it's the best soup he ever tasted.

Supper time, that universal family minefield, forms the core of Cooper's third picture book featuring Cat, Squirrel, and todderlike Duck, characters originated in her Greenaway Medal–winning Pumpkin Soup (1999). In softly brushed paintings of a cozy, whimsical woodland household, parental stand-ins Cat and Squirrel lovingly create substitutes for Duck's out-of-season favorite, pumpkin soup. Kerfuffles, hullaballoos, and other creatively termed uproars ensue as Duck refuses each offering, until a flurry of kitchen creativity begets a soup that meets the persnickety bird's approval. More accurate, perhaps, than ideal, the suggestion that whiny, sulky stubbornness gets results is somewhat balanced by a clever secondary narrative, in which beetle observers scathingly comment on Duck's misdeeds ("What a way to behave!"). Still, this lively read-aloud may be best appreciated by families beyond the picky-eater phase, whose reformed members can giggle as they recollect their own tableside mutinies. A recipe for Pink Soup (made from beets) appears on an extrawide interior jacket flap. Copyright 2007 Booklist Reviews.

In a starred review of Pumpkin Soup, PW praised author Helen Cooper's "uncanny ability to capture the dynamics of friendship." In Delicious! Cat, Squirrel and Duck are ready to make their world-famous pumpkin soup again. But when no ripe pumpkins can be found, stubborn Duck turns up his bill at the other soups his buddies concoct. Included on the inside cover is a recipe for "pink soup," made with beets. (FSG, $16 32p ages 4-8 ISBN 9780-374-31756-0; Sept.) Copyright 2007 Reed Business Information.

PreS-Gr 2— Cat, Duck, and Squirrel are back in this companion to Pumpkin Sou p (1999) and A Pipkin of Pepper (2005, both Farrar). Disaster has struck the pumpkin patch—no ripe pumpkins for the animals' favorite dish. The friends decide to make something new to eat, but Duck is unwilling to try either fish soup, mushroom soup, or beet soup (especially offensive because it is pink). Cat tries to trick Duck by mixing a combination of veggies and ingredients that result in a broth that is the exact color of pumpkin soup. After a tentative sip, Duck declares it "Delicious!" and order is restored in the old white cabin. The story has universal appeal—everyone either knows, or is, a fussy eater. Readers will empathize with Duck, who is obstinate without being intolerable, and cheer for Cat and Squirrel as their patience and accommodation lead to eventual success. The illustrations are warm and rustic, and the layout does an excellent job of mixing full-page portraits and white space. A recipe for "Pink Soup" is included. This beautiful book is a must-have.—Kara Schaff Dean, Needham Public Library, MA [Page 161]. Copyright 2007 Reed Business Information.

Unable to find a suitable pumpkin in the garden to use in the recipe for pumpkin soup, Cat and Squirrel attempt to make other versions of soup for their fussy friend, yet Duck is determined to have his special dish and so throws a full-scale pout session to get his way! 15,000 first printing.

With no pumpkins to be had for their favorite soup, Cat and Squirrel, with reluctant help from Duck, make other kinds of delicious soups but fussy Duck proves very difficult to please.

Unable to find a suitable pumpkin to use for soup, Cat and Squirrel attempt to make other versions for Duck, their fussy friend, but it's only when they find a way to make the dish orange that Duck agrees it's the best soup he ever tasted.

Cat, Squirrel, and Duck have a very serious problem: there are no ripe pumpkins in the garden for their favorite soup! They'll have to make something else, but while Cat and Squirrel are willing to experiment, all Duck wants is pumpkin soup. He won't even try a taste of the fish soup or mushroom soup, and the beet soup his friends make is the last straw— "I'm not eating that," he says. "It's pink!" Can Cat and Squirrel find a way to please their fussy friend?This follow-up to the popular Pumpkin Soup and A Pipkin of Pepper is a perfect story about a picky eater, illustrated with rich, expressive paintings in which children will find much to discover—and it includes a recipe for pink soup!