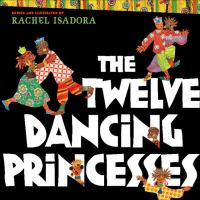 A retelling, set in Africa, of the story of twelve princesses who dance secretly all night long and how their secret is eventually discovered.

*Starred Review* In 1996 Jane Ray created a lovely, luxe version of this popular Grimm fairy tale about a clever soldier who discovers the nightly dancing escapades of 12 fun-loving princesses. Setting her own interpretation of the European story in Africa, as she has previously done in The Princess and the Pea (2007), Isadora offers an entirely distinct treatment that nonetheless rivals Ray's in sheer beauty. Working in collages of painted, textured paper, Isadora evokes an archetypal African kingdom through sumptuous, kente cloth textiles and Serengeti-like landscapes that pop vibrantly against primarily white backgrounds. The compositions, some of which seem influenced by the cut-paper artwork of Matisse, invite lingering examination for their impressive economy of means. In one scene, thick, parallel strips of orange against an aqua backdrop suggest a sunset's shimmer on water; elsewhere, clusters of textured shapes effectively convey silver, gold, and diamond foliage. Some readers may wish the compact, straightforward text tied in better to the setting, perhaps anchoring it to an individual country and culture. But folklore is rarely so specific, and the no-fuss approach does keep the story short for reading aloud. More significantly, perhaps, it provides an opportunity for young readers to marvel at how timeless, unembellished words can provide near-infinite space for an artist's interpretation. Copyright 2007 Booklist Reviews.

As in Princess and the Pea (which PW called "an innovative interpretation of a timeless tale"), Rachel Isadora has adapted another classic to an African setting with striking collages in The Twelve Dancing Princesses. (Putnam, $16.99 32p ages 4-up ISBN 9780-399-24744-6; Sept.) Copyright 2007 Reed Business Information.

K-Gr 3— Isadora relocates the setting of this story to the court of an African kingdom, and the result is a delightfully original version of the traditional tale. Double-page collage illustrations, crafted using oil paints, printed paper, and palette paper, feature a variety of African art and cultural motifs. The lovely princesses, whose skin tones range from light brown to deep ebony, are arrayed in a colorful range of traditional folk costumes, jewelry, and hairstyles. Beginning with the stunning cover, featuring exuberant dancing couples and huge white letters placed against a dramatic black background, Isadora's art evokes an air of high-spirited romance. Throughout, dramatic collages move the story forward at a lively pace. The dance scenes in particular, elegantly composed and detailed, come alive with swirls of movement. With her innovative re-imagining and masterful art, Isadora has created a memorable version of this tale that complements other fine retellings, such as those by Errol Le Cain (Puffin, 1981) and Jane Ray (Dutton, 1996), and extends the appeal of this timeless tale to a new audience of readers.—Marilyn Taniguchi, Beverly Hills Public Library, CA [Page 105]. Copyright 2007 Reed Business Information.

A retelling, set in Africa, of the story of twelve princesses who dance secretly all night long and how their secret is eventually discovered.

A magic cloak. A hidden passage. A secret underground world beyond imagining. Night after night, the princesses mysteriously wear out their shoes. But how are they doing it? The baffled king promises a great reward to any man who can solve the mystery. From the colorful flurry of the princesses? dressing room to a captivating nighttime scene on an underground lake, Rachel Isadora has revitalized and reimagined this well-loved Brothers Grimm fairy tale by bringing the story of the twelve princesses to Africa. Her collage of blazing colors, rich textures and dramatic shapes evoke the patterns and palette of this beautiful continent. Returning to the lush setting of The Princess and the Pea, the unique presentation of this classic tale is sure to enchant readers with its vibrant imagery.