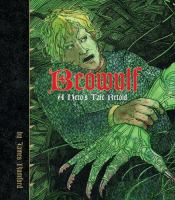 A simplified and illustrated retelling of the exploits of the Anglo-Saxon warrior, Beowulf, and how he came to defeat the monster Grendel, Grendel's mother, and a dragon that threatened the kingdom.

Beowulf 's action-heavy and single-minded take on heroism makes it an appealing choice for younger readers, while posing the challenge of tempering the intensity of the violent, limb-rending bloodbaths that make up much of the story. Rumford's version only lightly drips with gore, though, as he is more focused on preserving the language of the eighth-century epic. He carefully deploys only words derived from the Anglo-Saxon of the original—those that evoke a simpler, sterner, and more perilous age, and retells the tale in an evenly measured cadence, which sounds great read aloud in as booming a voice as possible. The busy pen-and-ink artwork, while rough, is suitably dramatic and expressive, washed by pestilential sage-hued greens, murky underwater blues, and the golden whorls of dragon's breath. Rumford is obviously passionate about the source and admirably encourages readers to seek out the original, whose ancient words will make the night darker, the shadows deeper, and, perhaps, your heart bolder. This fine introduction may inspire them to do just that. Copyright 2007 Booklist Reviews.

What you have heard before is nothing." So begins this strikingly illustrated adaptation of Beowulf. Restricting his vocabulary almost exclusively to words with Anglo-Saxon origins, Rumford (Seeker of Knowledge ) fashions a type of epic language: "It was then that Wiglaf showed his true heart-strength. Shieldless, with seared hands, he stuck his gleaming sword into the dragon. This freed Beowulf, who drew a knife from his belt and buried it deep inside the fire-snake." Rumford's own "heart-strength" comes through in his art, pen-and-ink and watercolor illustrations that convey the ninth-century action with 21st-century immediacy. Large panels offer detailed views of pivotal scenes, and Rumford's expert use of line generates an almost visible degree of motion; when Grendel's mother menaces Beowulf, he seems virtually to fall as she advances with her ominously curved knife. Behind the art and text panels in the first two sections lurks the dragon that is to prove so crucial in the end; in the concluding section, increasing numbers of crows foreshadow Beowulf's death. A very skillful presentation. Ages 9-12. (Aug.) [Page 67]. Copyright 2007 Reed Business Information.

Gr 5–8— A beautiful retelling of the ancient poetic tale. Beowulf, the Danish hero from the Land of the Geats, shows fierce bravery and great strength to slay the ogre Grendel; Grendel's sea-hag mother; and, in his old age, a fire-breathing dragon bent on mayhem. In order to capture the feel of the original Old English text, this shortened version is composed almost entirely of words rooted in Old English (Anglo Saxon). An author's note introduces the history surrounding the poem. Rumford cites Seamus Heaney's recent translation of the classic as inspiration. Handsome spreads consist of an off-white box of text outlined in black and larger boxed artwork drawn and finely detailed in black ink, then painted with watercolor—both set on a batiklike background. Parts of a dragon—claws, wings, spiked tail, pointed head—protrude from under each illustration, until the whole beast finally crawls out and wreaks destruction upon the Land of the Geats. While Michael Morpurgo's fine retelling of the tale (Candlewick, 2006) is much longer and more detailed, Rumford's brief text and highly appealing format make his version accessible to a younger audience with little change to the original story.—Susan Scheps, Shaker Heights Public Library, OH [Page 138]. Copyright 2007 Reed Business Information.

A powerful retelling of Britain's oldest epic vividly brings to life the warrior named Beowulf who defeated the ogre Grendel, Grendel's mother, and the dragon that threatened his kingdom. 25,000 first printing.

A simplified and illustrated retelling of the exploits of the Anglo-Saxon warrior, Beowulf, and how he came to defeat the monster Grendel, Grendel's mother, and a dragon that threatened the kingdom.

When sleep was at its deepest, night at its blackest, up from the mist-filled marsh came Grendel stalking . . .Thus begins the battle between good and evil, for lying in wait and anxious to challenge the ogre Grendel is a young man, strong-willed and fire-hearted. This man is Beowulf, whose heroic dragon-slaying deeds were sung in the courts of Anglo-Saxon England more than a thousand years ago.Award-winning author and illustrator James Rumford forges his own account of Beowulf with the few Anglo-Saxon words still present in our language. These ironstrong ancient words recall the boldness of the original poem and, together with Rumford’s pen-and-ink illustrations, they fashion an unforgettable story of a hero who never gave up—no matter how difficult the struggle—no matter how deep and dark the night.