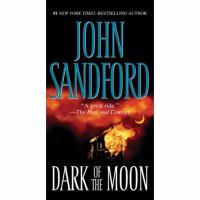 Dark of the moon

Headed to rural Bluestem to assist local law enforcement with the seemingly motiveless murder of an elderly couple, Minnesota Bureau of Criminal Apprehension investigator Virgil Flowers happens upon a raging house fire on the edge of town. The house's owner, Bill Judd, killed in the blaze, was an elderly recluse who, back in the day, ran an elaborate pyramid scheme and simultaneously bedded half the women in town. He escaped conviction on the fraud charge, and the money was never recovered. There have been no murders in Bluestem for a half-century, and now there are three in a couple weeks. Virgil is not an advocate of coincidence and so begins digging for a connection between the victims. Complicating matters is his affair with the sister of the local police chief. Sandford's plotting and dialogue are as crisp as ever, and the emergence of Virgil Flowers gives the author another idiosyncratic, thoroughly ingratiating hero to alternate with the ever-popular Lucas Davenport. Flowers, who made his debut as a secondary character in the Davenport thriller Invisible Prey (2007), is a low-key loose cannon whose wardrobe consists of alternative-rock t-shirts carefully chosen to match his agenda of the day. The appeal of the Davenport series is mainly tied to the hero's wit and self-deprecating humor, but this first Flowers entry is more about action: an adrenaline rush peppered with laugh-out-loud moments. Copyright 2007 Booklist Reviews.

Virgil Flowers, introduced in bestseller Sandford's Prey series (Invisible Prey , etc.), gets a chance to shine in his own vehicle and does so brightly. The thrice-divorced, affable member of the Minnesota Bureau of Criminal Apprehension (BCA), who reports to Prey series hero Lucas Davenport, operates pretty much on his own as he tackles a murder wave that hits the little town of Bluestem. At the center of the story is old Bill Judd, hated by many who blame him for the Jerusalem artichoke scheme that made him rich and others poor. Other motives abound as do suspects—including a religious/survivalist cult headed by a felon or some of the many who participated in the long ago orgies Judd orchestrated. Flowers likes to stir things up and see what happens, and plenty does as the killings continue. Sandford keeps the reader guessing and the pages turning while Flowers displays the kind of cool and folksy charm that might force Davenport to share the spotlight more often. 500,000 first printing. (Sept.) [Page 40]. Copyright 2007 Reed Business Information.

Virgil Flowers, a protégé of Lucas Davenport, is sent to Bluestem, a small town where everyone knows everyone else, to investigate the murders of a man burned to death in his home and a doctor and his wife--with the doctor found with both eyes shot out--unaware that he is tracking a murderer who may be targeting Virgil as his next victim. Reprint.

Virgil Flowers is sent to the small town of Bluestem to investigate the murders of a doctor and his wife and a man burned to death in his home, unaware that he is tracking a murderer who may be targeting Virgil as his next victim.

The first Virgil Flowers novel from #1 New York Times bestselling author John Sandford.“Virgil Flowers, introduced in bestseller Sandford’s Prey series, gets a chance to shine...The thrice-divorced, affable member of the Minnesota Bureau of Criminal Apprehension (BCA), who reports to Prey series hero Lucas Davenport, operates pretty much on his own..”*He’s been doing the hard stuff for three years, but he’s never seen anything like this. In the small rural town of Bluestem, an old man is bound in his basement, doused with gasoline and set on fire. Three weeks before, a doctor and his wife were murdered. Three homicides in Bluestem in just as many weeks is unheard of. It’s also no coincidence. And it’s far from over...