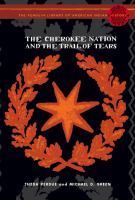 The Cherokee Nation and the Trail of Tears

Perdue and Green illuminate the Cherokee experience, beginning with their first contact with Europeans, around 1540, when the De Soto expedition visited their southern Appalachian territory. Their numbers were decimated by waves of epidemics beginning in 1697, and they ceded half their land to the British in the mid–eighteenth century. The U.S. government first attempted to "civilize" the Cherokees, but after the War of 1812, the policy of removal took precedence, as the Cherokees and their allies lost the battle of tribal nationalism versus states' rights. After 1836 the Trail of Tears, as the deportation of thousands from their homeland is now called, began in earnest.

Since the 1970s, scholars have produced a significant number of monographs on Native American history and prehistory. Recognizing that these were written primarily for an academic audience, "The Penguin Library of American Indian History" series has been inaugurated to allow leading scholars in the field to share their expertise with a lay audience. Calloway (history & Native American studies, Dartmouth Coll.; One Vast Winter Count: The Native American West Before Lewis and Clark ) examines the history of the Shawnee people from the 18th century through their repeated removals by the U.S. government during the 19th century. Particularly poignant is Calloway's description of the development and eventual collapse of the pan-Indian religious revitalization movement led by the Shawnee brothers Tenskwatawa, also known as the Shawnee Prophet, and Tecumseh. Renowned scholars on the ethnohistory of southeastern native peoples and coauthors of The Columbia Guide to American Indians of the Southeast , Perdue and Green have produced an excellent overview of the removal of the Cherokee people to Oklahoma from their homelands in southern Appalachia. They pay special attention to the development of the U.S. government's policies concerning the removal of native peoples from lands desired by white settlers. Although the story contained here is tragic, it is also a testament to the resilience of the Cherokee people. Both of these volumes are highly recommended to public and school libraries. Based on the quality of these initial volumes, libraries might also want to consider seriously putting the series on standing order.—John Burch, Campbellsville Univ. Lib., KY [Page 100]. Copyright 2007 Reed Business Information.

T his compact book by eminent historians Perdue and Green moves from the time when all Cherokees "lived in the southern Appalachians" to their forced expulsion to the Indian Territory, as American policy morphed from "civilizing" Native Americans to what might today be deemed ethnic cleansing. The Indian Removal Act (1830) fixed in law "a revolutionary program of political and social engineering that caused unimaginable suffering, deaths in the thousands, and emotional pain that lingers to this day." It's a tangled tale of partisan politics and Cherokee power struggles, of juridical argument and economic motive, of bitter personal disputes and changing public policy. Perdue (Columbia Guide to American Indians of the Southeast ) and Green (The Cherokee Removal ) have written a lucid, readable account of the legal complexities of the 18th-century "right of conquest doctrine" and the 19th-century "emerging doctrine of state rights"; the treaties, alliances, obligations and assurances involved; and the landmark cases Cherokee v. Georgia and Worcester v. Georgia (one effectively denying Cherokee self-government, one ineffectively affirming Cherokee sovereignty). Over it all hangs the disquieting knowledge that in the history of interaction between Euro-Americans and Indians, Cherokee removal "[exemplifies] a larger history that no one should forget." (July) [Page 44]. Copyright 2007 Reed Business Information.

Documents the 1830s policy shift of the U.S. government through which it discontinued efforts to assimilate Native Americans in favor of forcibly relocating them west of the Mississippi, and traces the decision's specific effect on the Cherokee Nation.

Documents the 1830s policy shift of the U.S. government through which it discontinued efforts to assimilate Native Americans in favor of forcibly relocating them west of the Mississippi, in an account that traces the decision's specific effect on the Cherokee Nation, U.S.-Indian relations, and contemporary society.

Today, a fraction of the Cherokee people remains in their traditional homeland in the southern Appalachians. Most Cherokees were forcibly relocated to eastern Oklahoma in the early nineteenth century. In 1830 the U.S. government shifted its policy from one of trying to assimilate American Indians to one of relocating them and proceeded to drive seventeen thousand Cherokee people west of the Mississippi.The Cherokee Nation and the Trail of Tears recounts this moment in American history and considers its impact on the Cherokee, on U.S.-Indian relations, and on contemporary society. Guggenheim Fellowship-winning historian Theda Perdue and coauthor Michael D. Green explain the various and sometimes competing interests that resulted in the Cherokee?s expulsion, follow the exiles along the Trail of Tears, and chronicle their difficult years in the West after removal.