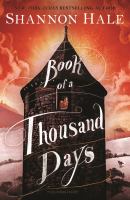 Book of a thousand days

Adapted from the Brothers Grimm fairy tale "Maid Maleen". Fifteen-year-old Dashti, sworn to obey her sixteen-year-old mistress, the Lady Saren, shares Saren's years of punishment locked in a tower, then brings her safely to the lands of her true love, where both must hide who they are as they work as kitchen maids.

*Starred Review* The author of the Newbery Honor Book Princess Academy (2005) offers another captivating fantasy filled with romance, magic, and strong female characters. The story, based on a little-known fairy tale from the Brothers Grimm, takes place in an imagined ancient Central Asia. Orphaned Dashti is a hardworking, pragmatic girl, who grew up in the open, windswept steppes. She finds work in the city with a young noblewoman, Lady Saren. Then Lady Saren refuses an advantageous marriage, and as punishment, she and Dashti are sentenced to seven years in a sealed tower. A tiny window is the tower's only connection to the outside world, and it's there that Saren's two suitors, the terrifying Khasar and the handsome Tegus, come calling. Written in diary form in Dashti's voice, the gripping tale follows the two young women through their imprisonment and their escape into a grim world of warring societies. Readers will quickly embrace Dashti, an invincible storybook heroine with a healer's touch, who accomplishes battlefield heroics while nurturing a powerful, secret love for a lord. Fans of Gail Carson Levin's Fairest (2006) will embrace this similar mix of exotic, fully realized setting; thrilling, enchanted adventure; and heart-melting romance. Copyright 2007 Booklist Reviews.

Hale (River Secrets ) delivers another winning fantasy, this time inventively fleshing out the obscure Grimm tale, Maid Maleen, through the expressive and earthy voice of Dashti, maid to Lady Saren. A plucky and resourceful orphan, Dashti comes from a nomad tribe in a place resembling the Asian Steppes, and is brought to the Lady's house in the midst of a crisis. Lady Saren, having refused to marry the powerful but loathsome Lord her father has chosen, faces seven years' imprisonment in an unlit tower. Initially, Dashti believes her worth is tied to her ability to care for her "tower-addled" lady until she can join Khan Tegus, to whom she is secretly betrothed. When the gentle Tegus comes to the tower, Dashti must step in for her traumatized lady, speaking to him as Saren through the one tiny metal door. Hale exploits the diary form to convey Dashti's perspective; despite her self-effacing declaration that "I draw this from memory so it won't be right," the entries reflect her genuinely spirited inner life. The tension between her unstinting loyalty and patience and burgeoning realization of her own strength and feelings for Tegus feels especially authentic. Readers will be riveted as Dashti and Saren escape and flee to the Khan's realm where, through a series of deceptions, contrivances and a riotously triumphant climax, the tale spins out to a thoroughly satisfying ending. Ages 12-up. (Sept.) [Page 73]. Copyright 2007 Reed Business Information.

Gr 5–9— Hale's novelization of the relatively obscure Grimm Brothers' fairy tale "Maid Maleen" is quite an improvement over the original. Rather than merely adding flesh to the Grimms' skeleton, the author has taken a few of the prominent bones (a love match thwarted by an autocratic king, the princess and her maid condemned to a tower for seven years, the country a wasteland when they finally escape) and constructed a new and far more appealing body. Lady Saren loves Khan Tegus, who rules a lesser realm, and she refuses to marry the evil man whom her father has chosen for her for political gains. The narrator, Dashti, is the princess's maid, immured in the tower almost as soon as she's found employment in the royal household. Bound to obey her mistress, Dashti is ordered to speak in her place when Tegus comes calling on their prison. Many readers will guess how that will eventually turn out, but they won't predict how Dashti and Tegus will overcome physical, political, and social obstacles to recognize their mutual love and defy convention in order to marry. Hale has created a richly imagined, mythical land something like medieval Mongolia, replete with magical song and touch therapy for spiritual or corporeal ailments, intuitive animals, and a sort of Faustian werewolf. It's a highly successful romance.—Miriam Lang Budin, Chappaqua Public Library, NY [Page 152]. Copyright 2007 Reed Business Information.

Fifteen-year-old Dashti, sworn to obey her sixteen-year-old mistress, the Lady Saren, shares Saren's years of punishment locked in a tower, then brings her safely to the lands of her true love, where both must hide who they are as they work as kitchen maids.

Fifteen-year-old Dashti, after sacrificing her own freedom to follow her sixteen-year-old mistress, the Lady Saren, into exile, brings Saren safely to the lands of the man they both love where they are forced to hide their true identities as they vie for his attention. 75,000 first printing.

Based on a classic Grimm's fairy tale, this is the story told by Dashti, a maid from the steppes of a medieval land, who sacrifices her freedom to accompany her mistress into exile. Imprisoned in a remote tower after Lady Saren refuses to marry the man her father has chosen, the maid and the lady have almost nothing in common. But the loyalty that grows between the two, the man they love in different ways for different reasons, and the lies they tell because of and in spite of each other, combine to evoke the deepest bonds, transcend the loneliest landscapes, and erupt in a conclusion so romantic, so clever, and so right that no reader will be left dry-eyed.