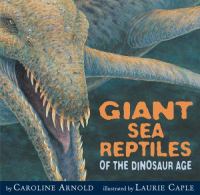 Arnold reteams with Caple for a look at prehistoric creatures that swam in the seas. The focus is on the Mesozoic period and its aquatic reptiles, including ichthyosaurs, plesiosaurs, and mosasaurs. The information about each animal varies. The diet and the birthing of ichthyosaurs are highlighted, while the physical characteristics and predatory habits of the plesiosaurs are center stage. Mosasaurs, which lived later in time than the others, were known as "supreme predators." Throughout, other information is interwoven (e.g., a two-page spread on fossil-finder Mary Anning; another about a scientist putting a dinosaur head on a skeleton's tail instead of its neck). Sometimes these turns seem like an interruption, but they're always interesting. Natural-history artist Caple painstakingly re-creates the creatures Arnold introduces, but it is the undersea paintings, with the reptiles gliding through the water, that are most effective. A list of places to see ancient sea reptiles will whet appetites for more. Copyright 2007 Booklist Reviews.

Gr 3–6— More than 220 million years ago during the Triassic period, ichtyosaurs, plesiosaurs, and mosasaurs were the largest marine reptiles. Readers learn what is known about these massive creatures and how scientists are continually making new discoveries based on fossil remains throughout the world. Arnold points out that even the scientists' thought processes have changed over time as additional discoveries are made. Chapters include the diet of these early reptiles and body features, including their size, birth, known range, and period in which they died out. Museums that have displays of these marine reptiles and an extensive index are included. Caple keeps the watercolor paintings subtle and subdued with earth tones of blue, green, and brown softly portraying features of each creature. Arnold has taken an immense amount of data and organized it in an appealing format. This book has some meat to it.—Sandra Welzenbach, Villarreal Elementary School, San Antonio, TX [Page 213]. Copyright 2007 Reed Business Information.

Provides information about enormous reptiles who swam the seas during the dinosaur age.

Examines the fossil bones of gigantic reptiles, such as the plesiosaurs and mosasaurs, from around the world to provide a comprehensive look at the life of these massive real-life sea predators that once ruled the seas with great stealth and strength.

Examines the fossil bones of gigantic reptiles, such as plesiosaurs and mosasaurs, from around the world to provide a comprehensive look at the life of these massive real-life sea predators that once ruled the seas with great stealth and strength.

Throughout the Dinosaur Age, enormous reptiles called ichthyosaurs, plesiosaurs, and mosasaurs swam the seas. Some of these massive creatures weighed more than 20 tons. Others had snake-like necks as long as 23 feet. From Kansas and Canada to Antarctica and New Zealand, fossil bones of these real-life sea monsters have been found.Acclaimed science author Caroline Arnold and noted natural-history artist Laurie Caple pair up once again to show how fossil evidence worldwide is helping us learn about these amazing reptiles. Featuring eerily beautiful illustrations that bring fossil creatures” to life, this thoroughly researched book gives insight into what Earth was like when prehistoric predators roamed the seas. Author’s note, index.